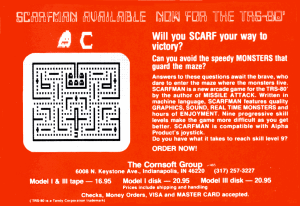 Five monsters start out at the top of the screen, initially with their eyes up. When in the eyes up state, monsters move quickly and chase you. You lose a life if one touches the Scarfman. 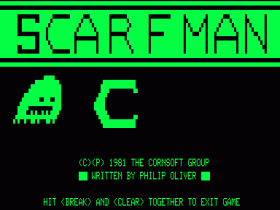 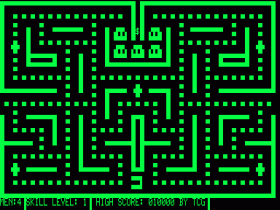 But if you eat one of the pluses scattered through the screen, all of the monsters lower their eyes. When in the eyes down state, monsters move more slowly, run away from you, and are vulnerable to being caught. If you catch a monster, it returns to the top of the screen with its eyes up again. The eyes down state doesn’t last for long; all of the monsters revert to the eyes up state after only a short time. The monsters shimmer just before they revert, giving you a bit of warning.

Clearing a screen by eating all of the dots and pluses moves you to a new screen. The difficulty level becomes significantly greater with each new screen. The monsters become smarter and the amount of time it takes for them to revert to the eyes up state becomes shorter. 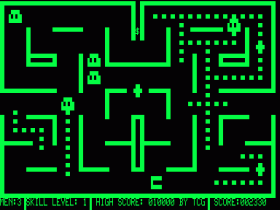 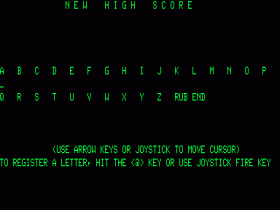 Scarfman is one of my favorite TRS-80 games. It has a nice feel, with very fluid movement that works well with a joystick. It uses minimal, but appropriate sound effects. I think it is the best of the Pac-Man games for the TRS-80.

I worked at a computer store in 1980. I was the first to open the box from Cornsoft for the store. I have an original t-shirt of SCARFMAN. It is light blue with all the print in brown; a picture of a monster going after the SCARFMAN, a diagram of the playing grid and the name “THE CORNSOFT GROUP” on the bottom. I did wear it, for advertizing purpose, but it still in great shape and the print in very easy to see and read. I’m not a computer user, much, just looked up for info after seeing my T-shirt again. I just wanted someone else to know this information, that liked the game. Thank You, Cheri Schneider

I remember playing this game for hours. There was a weird glitch that we discovered in the game about a year into playing it. If you toggled ScarfMan back and forth several times whilst in the pass-through on the sides of the screen, ScarfMan would “jump the track” and you would start to eat the walls. You would still rack up points and the monsters wouldn’t be able to touch you.