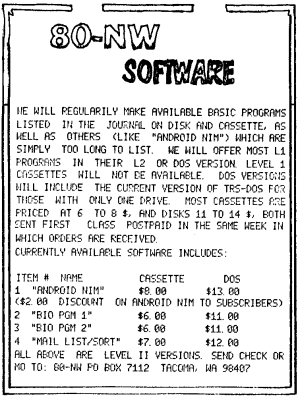 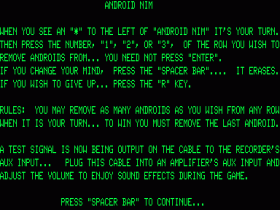 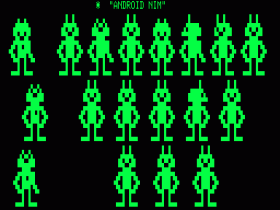 As far as the rules are concerned, Android Nim is a straightforward computerization of Nim. What makes it unusual is that androids are used for game pieces. There are three rows of androids: seven in the top row, five in the middle row, and three in the bottom row. Instead of just taking pieces, a special android destroys the other androids with a ray gun. In Android Nim, the player who destroys the last android wins.

What makes the game so special are the graphics and animation. The androids blink, look around, and seemingly talk to one another. They all turn to look at the android with the ray gun before he fires. 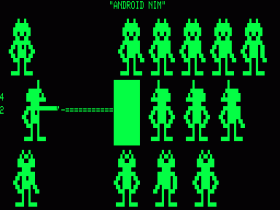 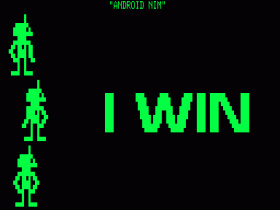 The computer has won!

The computer player plays a perfect game, and the only way to beat it is to make no mistakes. Nim is a difficult game to beat until you figure out the theory behind the game. In fact, Leo Christopherson wrote the game in order to teach his students about the binary system.

When it becomes clear that it has lost, the computer player “tries” to make illegal moves in protest. When it finally does lose, it displays a screen of random insults to the player. 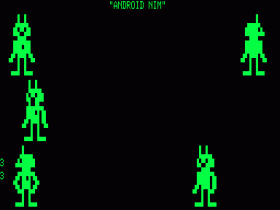 Now that the computer has no more moves, it tries to cheat 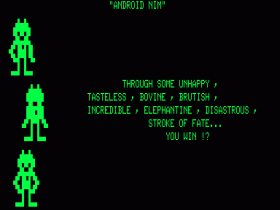 The computer is a poor sport when it loses

Somewhat unusually, the complete program listing of the original version of Android Nim was published in Creative Computing as part of a profile of Leo Christopherson.

Android Nim had a second commercial life in 1986, when Powersoft released a package called “Leo’s Greatest Hits.” It cost $19.95 and contained Android Nim along with five other Leo Christopherson games.

I remember this well, though it was from a bootleg copy at a computer club (around 1980). The 3d animation was amazing on a 128x48 display. I was just trying to teach Nim strategy to my kids (11 and 9 years old). Is there an online emulator for Android Nim anywhere? A scratch version would also be nice.