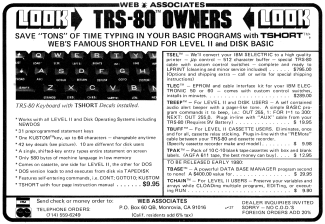 Web Associates advertisement from the February 1980 issue of 80 Microcomputing

After upgrading their TRS-80 Model I to Level II BASIC, many people missed the “shorthand dialect” of Level I BASIC. TSHORT was a very popular keyboard macro utility for Level II BASIC that added a similar kind of shorthand for BASIC commands. It was written by Ron Wirth and released in 1979 by Web Associates for $9.95. (The name Web Associates was not a reference to the World Wide Web, which it predated by ten years.) TSHORT ran in high memory above BASIC and consumed only 580 bytes of memory.

Like many programs at the time, TSHORT was distributed on a single cassette, with the version for cassette on one side and the version for floppy disk on the other. This minor inconvenience not only saved the cost of a disk but also helped users with only one floppy drive because early versions of TRSDOS could not perform single-drive copies. Users with floppy drives could use a program such as TAPEDISK to transfer a copy onto a floppy disk.

The keyboard macros within TSHORT (called “command words” by the manual) were generated by pressing the SHIFT key plus another key. For example:

In all, there were 31 fixed macros that could be generated. The disk version of TSHORT changed 10 of those macros to better suit Disk BASIC commands. There was also one customizable macro generated by SHIFT+K which could be as long as 64 characters.

TSHORT came with a set of self-adhesive keyboard decals that were supposed to be placed (very carefully) on the appropriate keys on the Model I keyboard. It used to be quite common to see Model I keyboards with TSHORT decals attached.

In 1980, Web Associates released a new version of TSHORT called TSHORT+. The price of the new version increased to $19.95 for a cassette and $24.95 for a disk. TSHORT+ increased the number of keyboard macros to 41 preprogrammed macros and 11 custom macros. It also featured a built-in lower case driver, keyboard debounce routine, and auto-repeat feature. Despite the improvements, its memory consumption only increased to slightly under 1K. Web Associates continued to advertise TSHORT+ until the beginning of 1981.