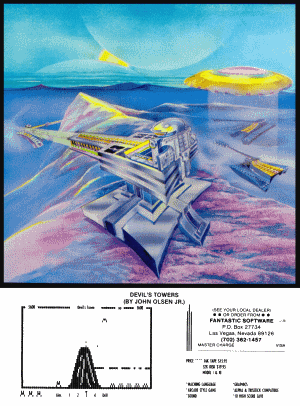 Fantastic Software advertisement from the December 1982 issue of 80 Micro 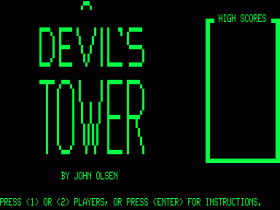 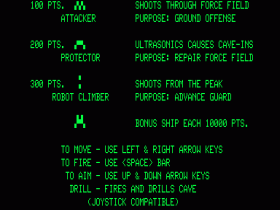 One unusual aspect of Devil’s Tower is the method used to shoot. Like most games, the SPACEBAR fires. Unlike most games, the angle of the shots is controlled by changing the aiming angle using the UP and DOWN arrows. The aiming choices are 1, 2, 3, 4, and DRILL. The higher the value, the more horizontal the shot. DRILL behaves like a 5 as far as angle is concerned but also allows you to tunnel a short distance into the mountain. This can be useful for avoiding the shots of the Attackers.

At the start of the game, the Attackers are easy targets to hit because they don’t move. But they soon start moving and the game difficulty increases every time the screen is cleared. Attackers that move make the game far more difficult. 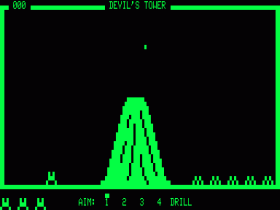 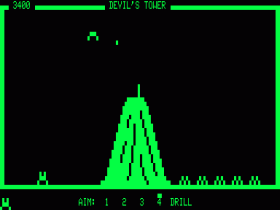 The Protector and Robot Climber threaten

Periodically a Protector appears at the top left of the screen. It moves slowly across the screen with the intention of erecting a Force Field over the Attackers, or fixing holes if a Force Field is already present. The only way to stop the Protector is to shoot it before it can erect a Force Field.

A Force Field stops all of your shots but allows the Attacker’s shots to pass through. The only way to punch holes in the Force Field is by hitting it repeatedly with your shots. 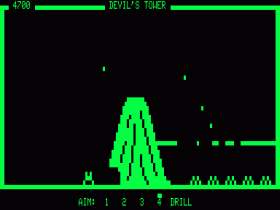 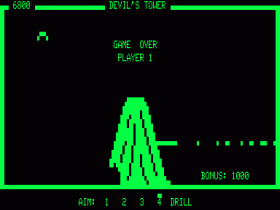 I have always liked Devil’s Tower. It is a deceptively simple game that is challenging without becoming frustrating.

John Olsen, if you’re out there, I have the original cover artwork that was done for this game.