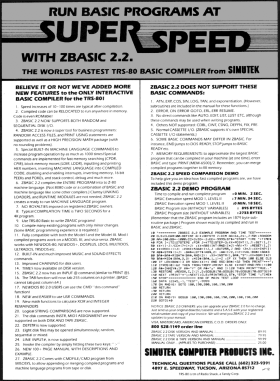 Simutek advertisement from the November 1982 issue of 80 Microcomputing

In contrast to many other compilers (most notably the Microsoft BASIC Compiler), Simutek charged no royalties on sales of programs compiled with ZBASIC. The only requirement was that this message had to be displayed for at least one second upon program start:

That message could be seen on a number of TRS-80 programs at the time. The most famous was probably the word processor CopyArt, written by Michael Gariepy and also sold by Simutek.

Simutek advertisement from the November 1980 issue of 80 Microcomputing

The best remembered TRS-80 version of ZBASIC was version 2, specifically 2.2, which was introduced in 1982. The price for the newer version was actually lower than the first: the disk version cost $89.95, the tape version cost $79.95, and both tape and disk versions together cost $99.99.

ZBASIC boasted speed increases of 10 to 100 times over interpreted BASIC. There were a number of new features, including:

ZBASIC supported most BASIC commands, with only a few exceptions. For obvious reasons, program editing commands such as AUTO, LIST, and EDIT were not supported. The only other major group of unsupported commands were mathematical functions such as SIN and COS, but there were substitutes for these functions in the ZBASIC manual.

I always liked the Simutek advertisements. They were quite informative and listed not only the features but also the unsupported BASIC commands. 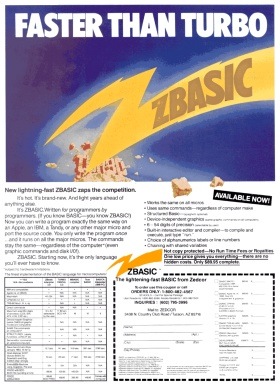 Zedcor advertisement from the December 1985 issue of 80 Micro

Version 3 of ZBASIC was a complete rewrite and there were a number of changes. Foremost among them was the company name: Simutek was now named Zedcor. There was no longer any tape version, but the disk version still cost $89.95. Also, ZBASIC was now a full-fledged compiler, not an “interactive compiler.” There was no longer any reliance on interpreted BASIC. Programs could now be written, edited, and compiled entirely within ZBASIC.

In addition to the TRS-80 version, there were also versions for the IBM PC, Apple II, CP/M, and the Macintosh. Platform compatibility was a highly touted feature. There were many other improvements, including:

There were future versions of ZBASIC, but version 3.1, released in August 1986, was the last to support the TRS-80.

I used ZBasic to create ROM based machine control programs on “STD Buss” computers. It was easy to create a header in assembly that would lead into the BASIC main routines, and ZBasic let me define the address of variables so they would wind up in the RAM of the boards. My most memorable program controlled a huge winch with a pair of 1200 Hp diesel engines and a line pull of 250,000 lbs. I took my TRS-80 Model 3 to Amsterdam to do the installation and final testing.

I used the machine language feature of ZBASIC to write very fast code to execute binary searches on long lists of data. Also eventually I wrote my own Assembler Editor and compiler which could dynamically integrate the machine code into a ZBASIC module. What a lot of fun! Well, eventually with the introduction of VB we became more productive and today I still prefer VB6 to the .NET versions. I don’t see the so-called object orientation of the latter as much of an advantage). But then I’m old fashioned. I suppose.

I purchased my first computer (a TRS-80) in 1978. All it had was a blinking cursor and no means to save programs or data. I had to type in a program after start-up and then lost it all after shut down. When ZBasic came out I had already been using Basic to write small accounting programs. During the 1980’s, having a position of Accounting Manager, I used Zbasic to write a complete set of accounting programs that were chained together. It included accounts payable and receivable, manufacturing inventory, production control, general ledger and much more including a 7 page monthly Income Statement with a table of contents. I stopped this in late 1980 and now in 2015, I am going back to those early programs and translating them for use in Liberty Basic for the Windows operating systems. Those old programs used line numbers and jumped around a lot. I don’t program with line numbers anymore and it creates a time consuming project to change them to my current way of writing software. It is all pure joy.

I used Zbasic to implement and test a digital tracking filter that became standard equipment on all boeing 757 and 767 aircraft in 1981.

To this day I miss it!