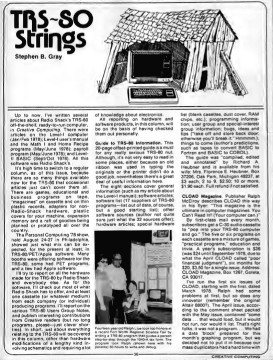 "TRS‑80 Strings," later known as “Tandy Gram,” was a column in Creative Computing magazine that focused on TRS-80 computers. It was written by Stephen B. Gray for most of its run and first appeared in the November/December 1978 issue.

I’ll try to report on all the hardware made for the TRS-80 by Radio Shack and everybody else. As for the software, I’ll check out most of what Radio Shack has to offer, and at least one cassette (or whatever medium) from each company (or individual) producing programs. I’ll report on various TRS-80 User Group Notes, and publish interesting contributions from Creative readers (but no long programs, please — just clever shorties.) In short, just about everything relating to the TRS-80 will be covered in this column, other than hardware modifications of a lengthy kind involving schematics and requiring a lot of knowledge about electronics.

“TRS-80 Strings” soon became one of the best sources of TRS-80 information available. It contained software and hardware reviews, information about upcoming products, and even information for programmers. Topics covered ranged from a June 1980 review of the word processor Scripsit to a January 1981 discussion with Leo Christopherson about creating graphics using string packing. Another frequent topic was computer music2, with a nice review of the Orchestra 80 in the February 1981 column.

Stephen B. Gray’s final “TRS-80 Strings” column (his 67th) appeared in the October 1984 issue of Creative Computing. The November 1984 issue didn’t include any of the regular columns because it was a celebration of the tenth anniversary of Creative Computing. But the column re-appeared in the December 1984 issue with a new title, “Tandy Gram,” and with a new author, Jake Commander. Jake Commander was well known to TRS-80 users for his “Commander 80” column in 80 Micro and articles in Color Computer Magazine. Here is what he wrote in his first column:

This is a welcome opportunity to share some of the TRS-80 secrets I have managed to unravel during many, many hours of work. For the last seven years, I have been using a TRS-80 in one form or another and can honestly say I have never regretted my original decision to buy one. The product line seems destined to be as long-lived as this magazine.