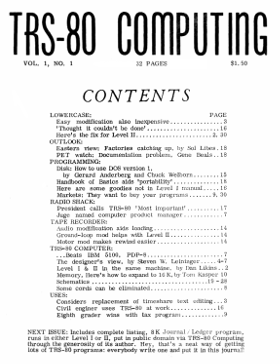 Computer Information Exchange was an educational nonprofit corporation that was based in San Luis Rey, California and founded by Bill McLaughlin. It sold a variety of low-cost TRS-80 software on cassette, mostly of an educational nature. Their most popular product was People’s Pascal, an implementation of the Tiny Pascal compiler1 that was created by Kin-Man Chung and Herbert Yuen. Computer Information Exchange sold two versions of People’s Pascal:

Bill McLaughlin had previously published a number of computer related newsletters, including The Computer Hobbyist, Word Processing Letter, and S-100 Bus User Notes. The first issue of TRS-80 Computing2 was published in August 1978. It was popular enough to warrant a second printing. TRS-80 Computing described itself as being “published as often as monthly,” but the schedule was irregular enough so that only three issues were published in the first year.

Each issue of TRS-80 Computing ranged from 24 to 32 pages (printed with very small type) and contained no advertising. It included news, product reviews, type-in programs, letters from readers, and more. Some of the content was reprinted from other user group newsletters but most was supplied directly by readers.

Both S-80 Computing and S-80 Bulletin ceased publication in August 1980, citing an inability to “justify operating redundant services in competition with a host of others.” The magazine Personal Computing took over subscriptions for both S-80 Computing and S-80 Bulletin beginning with their October 1980 issue. Computer Information Exchange continued to sell educational TRS-80 software as well as publish the Word Processing Letter, a newsletter devoted to “using personal computers for writing.”