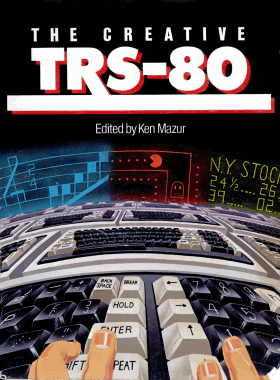 The Creative TRS-80, edited by Ken Mazur with a preface by Creative Computing Associate Editor John J. Anderson, has over 100 articles and reviews from Creative Computing. All articles focus on the TRS-80 and are split into nine different categories:

All of the articles had previously been published in Creative Computing but much of the information must have been unfamiliar even to regular readers. Some highlights include an interview with Leo Christopherson (plus a program listing of Android Nim!), reviews (written by Harry McCracken and Owen Linzmayer) of TRS-80 games, and the series “TRS-80 Graphics Made Almost Painless.” I also like “Typecasting,” an account of using TRS-80 computers, Electric Pencil, Scripsit, and an Alpha Comp typesetter to typeset Creative Computing magazines.

The Creative TRS-80 was obviously intended to promote Creative Computing, which was still publishing at the time. But I think that it remains an interesting snapshot of the TRS-80 world around 1983.