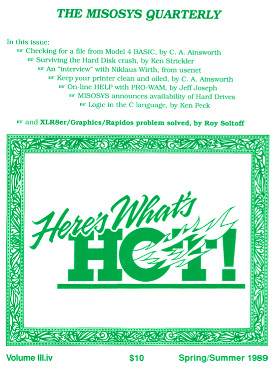 Spring/Summer 1989 issue of The MISOSYS Quarterly

Here is a description from a MISOSYS catalog:

Take an LDOS QUARTERLY, an LSI Journal, and a NOTES FROM MISOSYS. Blend them together into a professional magazine format filled with the latest information on MISOSYS products, programs and utilities, patches, significant messages from our CompuServe forum, and articles on programming and what do you have? Why THE MISOSYS QUARTERLY. Each issue of TMQ has a significant product special available only to subscribers. That means, you will invariably recover the cost of a subscription by taking advantage of these specials. Not only that, TMQ will keep you up to date with information, news, and announcements concerning our entire product line and related machine environments.

As the name suggested, The MISOSYS Quarterly was published four times a year (although the schedule slipped slightly over time). There were 27 issues published from Summer 1986 to Summer 1993. Each issue cost $10.00, or $25.00 per year for a subscription to the United States ($30.00 for delivery by first class mail). Subscriptions outside the United States cost extra: for example, a subscription to Australia cost $40.00.

Each issue of The MISOSYS Quarterly had an accompanying DISK NOTES, a floppy disk containing “program listings, patch listings, and other references to files” found in the issue. Each DISK NOTES issue cost $10.00 per 5 1/4" floppy disk, formatted either for the TRS-80 or MS-DOS. 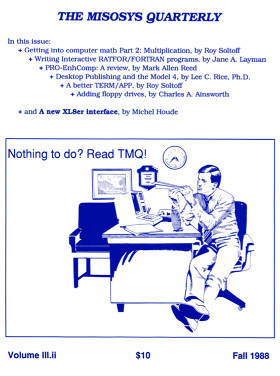 Fall 1988 issue of The MISOSYS Quarterly

The MISOSYS Quarterly tended to be aimed at a more technical audience than TRSTimes or Computer News 80. It included articles on a wide variety of topics from many authors, such as Frank Durda, Mark Reed, David Goben, Gary Shanafelt, Charles Ainsworth, Ken Strickler, Adam Rubin, Gary Phillips – and Matthew Reed. The only regular columns were “The Blurb” by Roy Soltoff (which carried over from Notes from MISOSYS) and “The Patch Corner” which featured official patches for MISOSYS products.

The MISOSYS Quarterly rapidly increased in size, reaching 112 pages with the volume 2, issue 2 (Fall 1987) issue. With the end of TRS-80 coverage in the December 1987 issue of 80 Micro, the MISOSYS Quarterly took on additional importance as a source of information for TRS-80 owners.

The LDOS Forum was one of the oldest SIGs on CompuServe and dated back to the MicroNET days (CompuServe’s previous name). It was described as “a strategic facility for technical discussions concerning LDOS, TRSDOS6, the MAX-80, and the TRS-80 in general.” CompuServe subscribers could access the LDOS Forum by typing GO PCS49 or GO LDOS.

Due to declining subscriptions and software sales, Roy Soltoff announced in the volume 6, issue 2 issue (Spring 1993) that The MISOSYS Quarterly would end with volume 6. The final issue published was volume 6, issue 3 (Summer 1993). As far as I know, volume 6, issue 4 was never published.