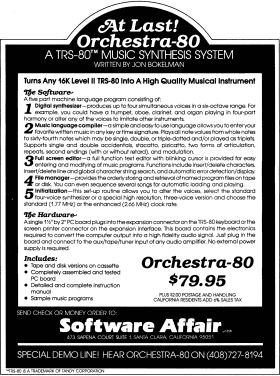 Software Affair advertisement from the July 1980 issue of 80 Microcomputing

According to Bryan Eggers, Jon Bokelman demonstrated a prototype system for the TRS-80 (presumably a variant of the SMS) at a computer club meeting. The club members were amazed when the prototype played Bach in four-part harmony. Some even looked under the table for a tape recorder to see if they were being hoaxed! The demonstration was impressive enough that Eggers and Bokelman founded Software Affair just a few days later and Orchestra-80 was born.

The Orchestra-80 manual describes the included software as consisting of five components integrated into one program:

Because of the specialized nature of music itself, I suspect that the Orchestra-80 initially appealed primarily to experienced musicians. But that changed after users began transcribing music for the Orchestra-80 and making it available on bulletin board systems around the country. After this happened, even musically inexperienced users could play music on their Orchestra-80 and it became well known. One musician named Robb Murray even created a 45 RPM record called Classical Mosquito! which consisted entirely of music rendered using an Orchestra-80.

The Orchestra-80 was monophonic only, but this limitation was addressed in 1981 with the introduction of the stereo Orchestra-85. The Orchestra-80 remained less expensive than the Orchestra-85 and continued to be sold for several years. But both were soon overshadowed by a more popular model, the Orchestra-90 for the TRS-80 Model III and 4 in 1982.

There was an earlier product which predates the Orch-80. It was called “The Music Box,” and it had a companion product called “The Rhythm Box.”

They were made by Newtech Electronics, the forerunner of Zebra Systems, Inc. that made products for the Timex/Sinclair line of computers, and who made the Spectrum Voice Pak for Spectrum Projects for the Coco.

The Music Box also started out on S-100 systems.

A tiny zap to change the port number used allowed the software on each product to be used on the other.

The Music Box was a better product because it was designed as a professional product in an external box and had filters on the sound output that provided cleaner sound.

It was a shame that the Orch-80 got all the glory, but it was cheaper and users didn’t really care that it sounded better.

Yes, I owned both The Music Box and Orchestra 85. The Music Box was a superior piece of hardware. However, I found The Music Box software difficult to program music on. Orchestra 85’s software was much easier to program and allowed for more musical expression. The percussion channel added a little extra “kick” to compositions as well. Ah, the memories!