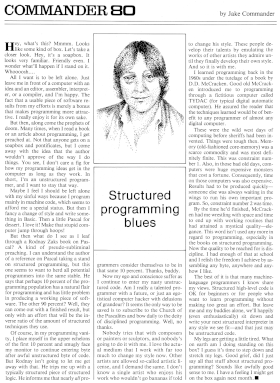 He wrote about many topics in his column, including TRS-80 games (he was the author of Cosmic Patrol), the misuse of trademarks, and the state of home computing in his native England.

My favorite “Commander 80” column was in the February 1983 issue, titled “Structured Programming Blues.” Jake Commander told about how he had learned to program using the 1957 book Digital Computer Programming by D D. McCracken. The book taught him how to program TYDAC, a fictional computer McCracken described as “TYpical Digital Automatic Computer… intended primarily as an aid to learning.”

By the time he’d finished, McCracken had me wrestling with space and time to end up with working routines that had attained that mystical quality – elegance. This word isn’t used any more in regard to programming, especially in books on structured programming. Now the quality to be reached for is discipline. I had enough of that at school and I relish the freedom I achieve by assembling any byte, anywhere and anyhow I like.

“Commander 80” ended with the May 1983 issue. Jake Commander later wrote another TRS-80 column in the magazine Creative Computing. It was named “Tandy Gram” and ran from December 1984 until the magazine ended in December 1985.