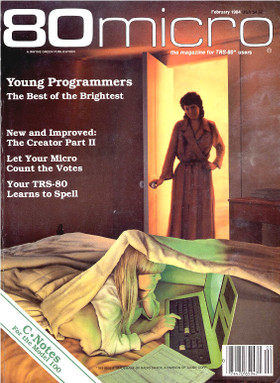 There were ten money prizes for winning entries:

In addition, there were Honorable Mentions worth a free subscription to 80 Micro plus possible publication.

Those prize money amounts didn’t include the usual payment for publication. For 80 Micro at the time, this was around $50 per printed page.

The results of the first Young Programmer’s Contest were published in the February 1983 issue of 80 Micro. Of the eleven winning entries (there was one tie), three were for the Color Computer and the rest were for the Model I or III.

All the winning entries were published in the February 1983 issue of 80 Micro.

There were no Honorable Mentions listed.

For the second year of the contest, the prizes and rules remained the same but the age categories were adjusted by one year:

80 Micro had dropped coverage of the Color Computer between the start of the contest and the publication of the results. Only three winning entries were published in the February 1984 issue of 80 Micro: the Grand Prize winner and the two non-Color Computer First Prize winners.1

There were four Honorable Mentions:

For the third (and final) contest, the rules were tightened so that all entries had to be written for the TRS-80 Model III, 4, or 4P only. This left out the Color Computer (not surprisingly) but also the Model I.

There were four Honorable Mentions:

Wow, someone who remembers this! That was me, Adam Wells, who got third place in the 10-and-under group in 1983 for Math Countdown. I did win $50 plus my program was published in 80 Micro. I got a couple of letters from people who had tried to type it in and had had problems with it.

My local newspaper found out about this and ran a short human-interest story on me and my family, with a photo of me. Later, that newspaper story was, strangely, picked up by the tabloid Weekly World News, which then ran a story about me and how weird it was that a 10-year-old boy would rather play on his computer than throw a baseball (I was ahead of my time). I would have never known about this, except that my aunt happened to buy a copy of it that week.

Thanks for the memories! I should load up a TRS‑80 emulator and try to run my old program Math Countdown. As I recall, it wasn’t super exciting. There was a picture of a rocket on the screen, and you had to answer simple math problems correctly in order to get the countdown to advance. When you got to zero, you were rewarded with an animation of the rocket taking off.