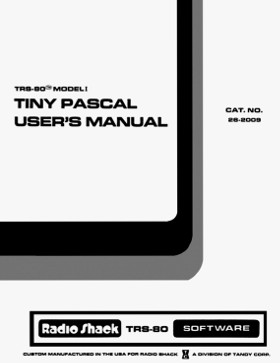 The first version of Tiny Pascal appeared in a three-part series of articles in BYTE titled “A ‘Tiny’ Pascal Compiler.” They were written by Kin-Man Chung and Herbert Yuen and appeared in the September, October, and November 1978 issues. Those articles were also later published in The BYTE Book of Pascal that was published in 1980.

This version of Tiny Pascal was written in North Star BASIC. According to the articles, it implemented most of Pascal with some limitations:

On the other hand, Tiny Pascal did add some extensions to standard Pascal, such as else clauses in case statements.

People’s Pascal I was a version of Tiny Pascal for the TRS-80 which was introduced in 1979. It was sold by Computer Information Exchange of San Luis Rey, California, who were also the publishers of the TRS-80 Computing newsletter.

Almost all Tiny Pascal versions (and most Pascal implementations) didn’t generate object code directly, but instead generated p-code. The p-code consisted of instructions for a somewhat standardized virtual machine that were executed by a separate p-code interpreter. A unique feature of People’s Pascal I (among Tiny Pascal versions) was its ability to generate native Z80 code directly from p-code.

Computer Information Exchange also sold another version of Tiny Pascal known as People’s Pascal II. It cost $23.50 and required a 16K or 32K Model I.

People’s Pascal II was written in machine language and also generated p-code. Its p-code interpreter was somewhat faster than People’s Pascal I (generating programs that ran four to eight times faster as Level II BASIC), but it had no option to compile to Z80 code.

Another version of Tiny Pascal was introduced in 1980 by SuperSoft, a company based in Champaign, Illinois. The SuperSoft Tiny Pascal, also known as ‘Tiny’ Pascal, cost $40.00 for a cassette version and $45.00 for a disk version. It was described as the only “authorized version” of Tiny Pascal for the TRS-80.

Here is a description from an advertisement in the June 1980 issue of Kilobaud Microcomputing:

A good resource for the SuperSoft Tiny Pascal is Pascal, a book written by David L. Heiserman and published by TAB Books in 1980.

Radio Shack’s Tiny Pascal wasn’t as powerful as full-featured Pascal compilers, such as Pascal 80 from New Classics Software or Alcor Pascal from Alcor Systems. But unlike the larger packages, it ran fine on a 16K cassette-based TRS-80. Mark Renne in 80-U.S. Journal described Tiny Pascal as “an excellent choice for the tape user or those not sure of their interest in Pascal.”

Radio Shack never sold a version of Tiny Pascal for disk. But there were many articles written describing different approaches to convert the cassette version to disk. A few examples include:

Radio Shack continued to sell Tiny Pascal for almost as long as the TRS-80 itself. It appeared for the last time in a 1987 Radio Shack catalog but was still available from Radio Shack for some time after that.

The Model I Radio Shack version included the source code for the compiler itself, in Tiny Pascal, which was very educational to read. The Model III version did not.