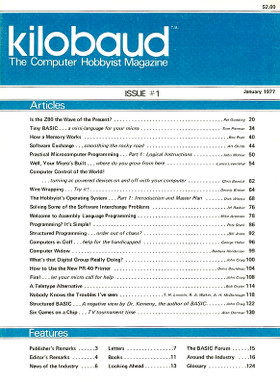 Kilobaud was actually Wayne Green’s second computer magazine. His first was the legendary magazine BYTE, which began in September 1975. Wayne Green published the first four issues of BYTE, but Virginia Londner Green (his ex-wife) took control of the magazine after that. Explanations differed as to exactly what had happened, but there were plenty of bad feelings to go around.

After losing his first computer magazine, Wayne Green decided to start another to compete with (and potentially overtake) BYTE. The original idea was to call the new magazine Kilobyte and the first advertisements in the December 1976 issue of 73 magazine used that name. But Kilobyte was too similar a name to BYTE and it was soon changed to Kilobaud. As Wayne Green said in the next issue of 73:

We were going to call it Kilobyte, but decided to duck a lot of legal expenses by changing the name slightly … rather spend the money on a better magazine than lawsuits.

Wayne Green described his plans for Kilobaud in his “Publisher’s Remarks” column in the first issue:

This brings me to my concept of Kilobaud. I don’t know how much of it will stick, we’ll see. My idea is to publish a computer magazine which will make it possible for newcomers to computing to get up to speed. It is all too easy to get so involved with advanced ideas that you forget the beginner — we’ve done this a bit with 73 in recent years and I’m working hard to get back to where some of 73 is for Novices.

I view Kilobaud much as I do 73 — as a medium for hobbyists to contact hobbyists — sort of a large scale newsletter. We’ll try to keep the editorial ego trips down and go light on the avuncular advice (except in the editorials and answers to letters).

At another point, he wrote:

Kilobaud intends to promote the fun and practical applications of personal computer systems. 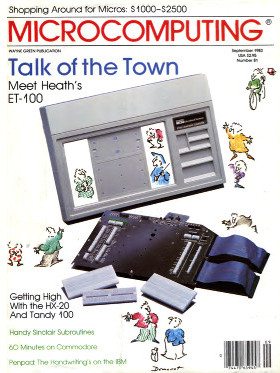 Wayne Green had big ideas about the future of the personal computer. He wrote in the first issue:

If you’re thinking this personal computer “movement” is going to remain in its current state (i.e., limited to several thousand enthusiasts) you’re wrong. We’re going to see this thing bust wide open in the near future.

As it turned out, 1977 was an interesting time to start a computer magazine: it was the year that the Commodore PET, Apple II, and Radio Shack TRS-80 were all introduced.

The first issue of Kilobaud contained an account of Wayne Green’s trip to visit various computer manufacturers. One of those manufacturers was the little known (at the time) Apple Computer. This was one of the first mentions of Apple Computer in a mainstream magazine.2

The second issue contained an in-depth look at the Apple I in a five-page article by Sheila Clarke called “The Remarkable Apple Computer.” This has been described as the first major news article written about the Apple I.

The first mention of the TRS-80 in Kilobaud was by Wayne Green in the October 1977 issue:

The unveiling of their TRS-80 computer came as rather a surprise to most of the media … and probably as a severe shock to most of the manufacturers and computer store owners. By now, you probably know the details of the Z80 — 4K BASIC in ROM, and disk system coming. The plastic molded case is one of the best looking in the field; there is no question that Radio Shack is in there.

Another notable article was the review of the TRS-80 Model I in the January 1978 issue that was written by Ed Juge. (This was before Ed Juge joined Radio Shack.)

Kilobaud Microcomputing never managed to compete with BYTE, even though it covered much the same material and focused on a similar audience. I’ve never really understood why, because it always seemed to me to be a far more interesting magazine than BYTE.

In late 1983, Wayne Green sold Microcomputing, along with four of his other magazines, to CW Communications. Wayne Green’s “Publisher’s Remarks” column continued to appear in Microcomputing, unlike his equivalent columns in 80 Micro and Hot CoCo which ended after the deal.

However, the future was magazines targeted at specific computers, such as PC Magazine and Macworld, not general computing magazines, like Microcomputing. Ironically, that was a trend that Kilobaud Microcomputing had begun when it spun off 80 Microcomputing in 1980. The final issue of Microcomputing was published in November 1984.