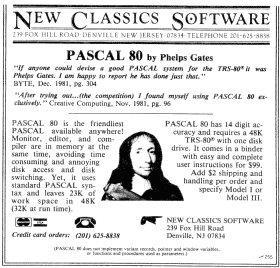 Two different companies sold versions of Pascal 80: Ramware (a division of Softside magazine) and New Classics Software. The first version of Pascal 80 was released by Ramware in early 1981. That version worked only on a TRS-80 Model I with TRSDOS. The Ramware Pascal 80 was described by the manual as “basically Standard Pascal, with some restrictions and extensions.” Those restrictions meant that “pointer Variables, Variant Records, NEW, DISPOSE, WITH, GET, and PUT are not implemented in PASCAL 80.”

New Classics Software released several further revisions to Pascal 80 which addressed almost all of the limitations of earlier versions (including the lack of pointers). Later advertisements described Pascal 80 as a “nearly complete subset” of standard Pascal.

Due to the strict software export controls in place in the United States at the time, Pascal 80 couldn’t legally be exported to the Soviet Union. This led to New Classics Software’s memorable advertisement that described Pascal 80 as “too powerful for the Red Army.”

re: “Radio Shack Network III networking hardware” — I looked, but could not find, much information on this topic.

(I think we had one of these in high school but I’ve not seen any emulator functionality for them.)

Would love to see an article on this.

Thanks for the continued good research! Great article.

Also, am curious: What specific “support” did the Pascal 80 School Package include for the Network III? If the Radio Shack Network III, as I am guessing, was just a switch and amplifier hardware how did the software include support for it?

Interesting that there was a hires graphics extension for Pascal 80. I actually used Turbo Pascal for CP/M 2.2 on my Model 4P during my university days. One semester I was studying Computer Graphics, and wrote my own graphics library for the uLab Grafyx Solution for Turbo Pascal. At the end of the year I actually prototyped my Ray Tracing assignment (cutting edge back then – seriously!) on the 4P!!! I used 3 “colours” – back, white and checkerboard/dithered. Actually looked quite decent at the time… still have the source around somewhere…

We had the networked system at my high school that we ran what was, I presume, Pascal-80. It was “new” my senior year. and was part of an AP computer science class. I can remember we loaded files and the start of class and saved them at the end of class, all to a single computer that had a HDD. Heady stuff for 1984 high school computer class.

I have been trying to use Pascal 80 on my TRS-80 with two external disk drives. I have the three 5.25 disks, the first of which is supposed to contain the essential files, and the detailed manual. The sample program complies just fine–but it will not run! I have tried saving it to the Pascal 80 disk 1 and also to the TRSDOS 2.3 boot disk; in both instances, compiling occurs but the program won’t run (the message is either “Parity error during read” or “No such file.” But the file appears in the DIR of the disk to which it was saved!

Can anyone help? I’m new to this and will gladly phone from France to the States to get some direct assistance from those more knowledgeable than I. Previously, I’ve used UCSD Pascal on an Apple II and a TI 99/4A–but this has me baffled.