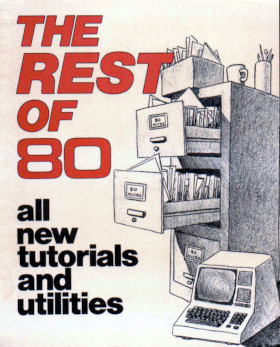 The introduction to The Rest of 80 describes the origin of the book:

The people at 80 Micro hate to turn down good manuscripts. The problem is trying to fit them all in the magazine. So somebody came up with the great idea: “Let’s take the best of the ‘rest’ of 80 and publish them in a book!”

The articles in The Rest of 80 are divided into three sections: Tutorial, Graphics, and Utilities. There are 31 articles by 29 authors on a variety of topics. (Craig A. Lindley and John Blommers have two articles each). My favorites include “Tiny Pascal for Disk” by David Goben and “Blinking and Repeating on the Model I” by Craig A. Lindley.

Unlike some other magazine article collections I have seen, there is no real theme to The Rest of 80. It reads more like an extra issue of 80 Micro, minus the reviews, columns, and advertisements. 80 Micro published 12 normal issues in 1983, as well as an “Anniversary Issue” at the beginning of the year. If you add on The Rest of 80, then it was as though 80 Micro published 14 issues that year, an incredible amount of TRS-80 material available at the time.