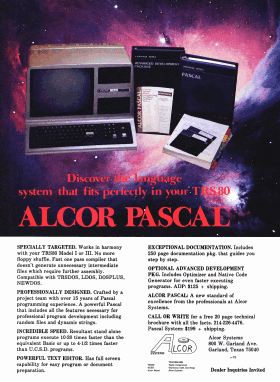 Alcor Systems advertisement from the December 1982 issue of 80 Micro

The Alcor Pascal compiler grew out of the desire four years ago to have a quality Pascal compiler for CP/M use. At that time there were no professional quality compilers on the popular CP/M operating systems that were very memory efficient. After two years of development a completely operational compiler emerged that saw several hundred thousand lines of Pascal code run through it. At this time it was decided that this compiler formed an ideal basis for the first professional quality Pascal compiler on the TRS-80. Since a void existed, and Pascal’s popularity was ever increasing, it was decided to enter the TRS-80 market.

A project team was formed and 1½ man years later saw the Alcor Pascal compiler introduced as a commercial product. This underlines the amount of work required to take a completed system and make it a viable commercial software product. The Pascal compiler consists of 17,500 lines of assembly language runtime support and over 8,500 lines of Pascal source code. Not a minimal amount of work for a product in this price category!

Alcor Pascal was a complete editor/compiler system. It came with a highly-configurable editor named Blaise (later upgraded to Blaise II) which, like Pascal itself, was named after the French mathematician Blaise Pascal. Blaise used a virtual memory system to allow editing files larger than memory. Alcor Systems also sold the Blaise and Blaise II editors as separate programs.

Like most Pascal compilers at the time, Alcor Pascal compiled programs into p-code, a form of intermediate code. The p-code could be executed with a special interpreter. But unlike many other compilers, Alcor Pascal could also create pure machine language programs. Alcor Systems sold an optional “Advanced Development Package” for $125.00 that included an optimizer and native-code generator to convert to machine language. Machine language programs created in this way ran three to five times faster than p-code.