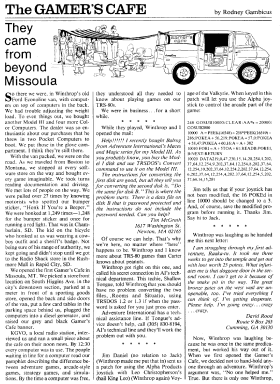 “The Gamer’s Cafe” was a column about TRS-80 gaming which ran in 80 Micro magazine. It first appeared in the November 1982 issue near the height of the TRS-80 game market and ran until April 1984. “The Gamer’s Cafe” had some similarities to “Captain 80,” a column written by Bob Liddil that premiered in the first issue of 80 Microcomputing in 1980 and later appeared in 80-U.S. Journal.

With only a few exceptions, “The Gamer’s Cafe” was written by the fictional character of Rodney Gambicus. The column started when Rodney and his friend Winthrop Luzerdraw decided to travel the country in a Ford Econoline van. They filled the van with TRS-80 computers and games, including multiple Model I’s, Model III’s, Color Computers, and two Pocket Computers that the Radio Shack dealer threw in as part of the deal. They also had a PMC-80 which they described as a “PMC ½.” Their plan was to stop at various locations around the country, put out tables, and let people play TRS-80 games, literally a “Gamer’s Cafe.”

Rodney and Winthrop soon met Mad Max, initially described as a “hippie tree planter who hadn’t been out of the woods since 1976, which was when he finally got back from Woodstock.” Max had a natural talent for the game Sea Dragon and quickly beat Winthrop’s high score. Mad Max continued traveling in the van with Winthrop and Rodney (he fell asleep and Rodney didn’t want to wake him).

In the third column, Winthrop attempted to best Max’s high score in Sea Dragon, unaware that Rodney had spilt Milk of Magnesia on the disk. The horrible bugs that resulted (including the nuclear reactor turning into a smiley face and whistling the tune from Leave it to Beaver) led to Winthrop leaving the Cafe and being committed to the Prairie Sunset Rest Home.

Soon after, Max lost the van and computers in a craps game with Nurse Ada Lovelace, the head nurse at the rest home. Now homeless and penniless, Rodney and Max met up with Mercedes Silver, a 10-year old prodigy who was studying for her Ph.D. at the Johns Hopkins Center for Mathematically and Scientifically Precocious Youth. (“Mercedes Silver” was the name of the paint color of the TRS-80 Model I and III, also known as “Battleship Grey.") Using her knowledge of mathematics, Mercedes easily won back everything from Nurse Lovelace in a blackjack game.

Since she now owned the van and the computers, Mercedes joined Rodney and Max on their journey. From then on, they traveled the country, encountering condo salesmen in Florida (who resembled the undead), nearly freezing after the van broke down in Utah, and suffering from hunger in Ohio.

A popular feature in the column was the high score list, known as the Big Board. The high scores of Winthrop, Max, and Rodney started out the Big Board but it soon expanded to include reader scores as well. Reader scores presented a problem in later issues after hacks were discovered for some games, leading to those games being banned from the Big Board.

But by the middle of 1983, it was clear to everyone that the TRS-80 games market was declining. Information about new games stopped appearing in “The Gamer’s Cafe” and observant readers might have noticed that November 1983 was the final time readers were asked to submit their own high scores.

The story arc that capped “The Gamer’s Cafe” was tinged with sadness. As part of her Ph.D. project at Johns Hopkins, Mercedes had built the “Mach 4,” an unbelievably powerful supercomputer (based on the TRS-80 Model 4) housed underground. (Modern readers might be amused by the idea that the incredibly powerful Mach 4 had a 1 megabyte operating system and ran at 3 GHz!)

The Mach 4 was so powerful that it somehow affected time, leading to claims it violated the SALT treaty. As Rodney described it, “When the microprocessor is crunching data, clocks in the immediate area run backwards.”

The intense work on the project proved to be too much for Mercedes, causing her to burn out from the pressure. No longer possessing her incredible programming skill, she returned to live with her parents in Baltimore.

Mad Max wrote the final installment of “The Gamer’s Cafe” in April 1984. After the departure of Mercedes, Rodney became obsessed with the notion that the Mach 4 itself was evil. He managed to destroy it, but at the cost of becoming permanently lost in a time displacement, “wandering aimlessly through the dark corridors of time.” Mad Max, now the only member of the Cafe left, was forced to sell the van and almost all the computers to pay parking fines (the van had been left in a no-parking zone).

Over two decades later, the concept behind “The Gamer’s Cafe” sounds odd but it exemplified the playfulness that was such a characteristic of 80 Micro at the time. The column also served as a means for publishers to announce new games and to offer tips and hints for readers. Clever ways were used to integrate real people from the game companies into the fictional story. My favorite example was the time the travelers encountered Jackson Dott, marketing coordinator at Avalon Hill, on an empty desert road outside Las Vegas.

For fictional characters, the members of “The Gamer’s Cafe” were surprisingly prolific. Mad Max wrote an editorial for 80 Micro. Rodney, Max, and Mercedes edited the 80 Micro one line game contest, which was first announced in the “Gamer’s Cafe.” Several mentions were made about Rodney and Max editing an anthology of games from 80 Micro that, as far as I know, was never published. Mercedes Silver was later used as a house name for the author of the “Feedback Loop” column after the departure of Terry Kepner.

The name of the real author of “The Gamer’s Cafe” was never given, although there were several hints scattered throughout the columns. I suspect that Winthrop and Max also corresponded to specific people, at least initially, because of their scores on the Big Board.

“The Gamer’s Cafe” was one of my favorite parts of 80 Micro and I was sorry to see it end. I still like this passage written by Mad Max that ended the final column:

Actually, I didn’t sell all of the computers. I kept the PMC ½. I hooked it up to a car battery, put it on a park bench in the Boston Common, and booted Lunar Lander. When I got to Boylston Street, I turned around for one last look. Dusk was falling on a cold and grey day. Flakes of snow were drifting in the wind. I could still see the PMC’s flickering screen. It cast its ghostly green light across the months, to the time when I first met Rodney and Mercedes. We’d embarked on a heck of a journey together. Now, it was finished.

I still have the December 1983 issue of 80 Micro. I saved it because in that issue in The Gamers Café they published the following:

Maybe we should retire Lunar Lander, too.

“In the [September] Gamer’s Café you stated that the final disgrace will be in the cheating of Lunar Lander,” write Seth Eliot of Brooklyn, NY. Then he proceeds to give instructions on refueling:

On the Model I, exit the game by pressing Break and Reset, hit Enter at the memory size prompt, type SYSTEM, and then type in /32767.

“It seems that this memory location refuels you without any damage to the game,” write Seth. “Sorry, Max.”

“Not half as sorry as I am,” Max grunted

I saved a copy of 80 Micro (don’t know where it is at the moment) because I was listed as the holder of the high scores of both Meteor Mission & Cosmic Fighter. Even though Mad Max seemed to question my high scores, I assure you they were reached legitimately. If you can only imagine the “wasted” hours it took to achieve this cherished milestone. It was good to be a part of computing at that time. We had CP/M and BBS (bulletin boards) and “interfaces” under our monitors. And no Microsoft!

Thanks for the memories.

I remember the column in which you were mentioned. It was the June 1983 issue.

I taught school in Phoenix, AZ and in 1979 our PTA bought us a TRS80 Mod I – CPU, monitor & tape drive. The principal put it in my room (I guess I had mentioned the word “computer” in a faculty meeting or something) and asked me to get a math program running. Well, the only prepackaged programs available was the Math I from Tandy. So I had to learn Basic and eventually had some computer activity going. The next year, the school purchased 3 additional Mod I, expansion interface, 2 external drives and a Language packet. We had a computer network in an elementary school! People came from around the Valley and state to see what we doing.

After school, another teacher and I worked on Haunted House and laughed our heads off when we finally solved it. Funny how simple things seemed so different then. We rejoiced when we got a stick figure to walk across the screen using the gigantic pixels.

The manual that came with the first unit was typewritten with some of the computer symbols actually written in by hand. It had a light blue or green cover and was stapled in the corner. Later I realized how rudimentary it was because it discussed about random access files somewhere around pages 12-16.

Wow, what a great read!

Would anyone have a digital version of the ENTIRE series? It would be a dream to get my hands on a complete transcript of the series.

I was the “other teacher” mentioned in the previous comment, Ken neglected to say that it was about 7:00 at night that we finally beat the Haunted House. How we figured out to walk through the wall of fire, I’ll never know.

As an interesting trivia note, I was one half of the writing team, along with Beve Woodbury, who wrote the Feedback Loop column for 80 Micro under the byline of Mercedes Silver.

I’d love to know who wrote The Gamers Cafe. It was truly sublime.

I’ve been slowly going through what few 80 Micro issues I have left, and just reached April 1984, did a search to see if anyone knew about the Gamer’s Cafe and if it had ever been collected. Wish it were!

By the time April drew around, the Gamer’s Cafe was what I looked forward to most in the magazine.

Is that David Goben I see up there??? I sit here remembering going to our local TRS-80 club meetings back in the day and talking about him, and how awesome his software was. He inspired me, and is likely one of many things that set me on my career path.

I have everything for the Model 4 including File Utils, MagicDraw, Script, FastBack, Small C, and quite a few others. I still use all of my old TRS-80 gear including a Model 1, Model 4, 4P and a 512k CoCo 3. Hell, I just got a tattoo last week that I worked up in MagicDraw because that was the only art program that yielded exactly what I wanted.

I have a serious love for these old machines and software. Especially considering what I do for a living. Dealing with servers and network security all day makes one long for a simpler time. A simpler time exists in my home office. :)

The Gamer’s Café was easily my favorite column in 80 Micro, and the primary reason I subscribed.

I was actually the winner of the one line game competition. The experience eventually led to a career in game development, culminating in the development of “Siege of Avalon” in 2000. I no longer develop games, but I continue to write graphics intensive software to this day.

Thank you for being an inspiration!