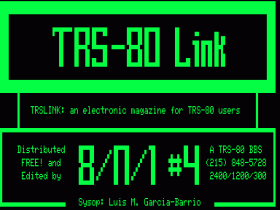 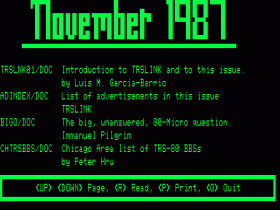 First page of the table of contents

The first issue of TRSLINK (issue #01) was released around November 1987. New issues were released roughly every month, although this varied due to external factors. Because of the decentralized way TRSLINK was distributed, there was never any way to tell how many readers it had, although they probably numbered in the thousands. 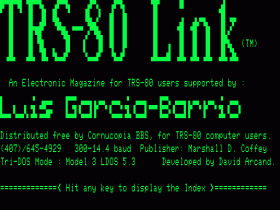 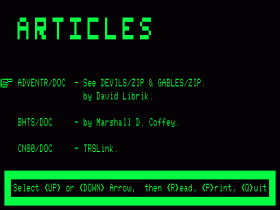 First page of the table of contents

Each TRSLINK issue included a viewer so you to read the issue on your TRS-80. The original, written by Luis Garcia-Barrio, allowed you to see see the TRS-80 graphics embedded in the articles. Later on, David Arcand wrote an improved version which could display high-resolution graphics files and contents of file archives right from within the viewer. One nice feature of his viewer was that the same version ran on the Model I/III/4 and worked with every DOS. Dave Phillips even wrote an MS-DOS version of the TRSLINK viewer that simulated the TRS-80 graphics.

The final issue of TRSLink that I know of (issue #61) was released sometime around Christmas 1994.