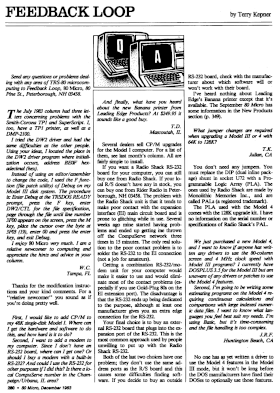 In “Feedback Loop”, Terry Kepner answered questions about software, hardware, programming, product availability, and practically anything related to the TRS-80. His answers were very detailed and in depth. At the peak of the magazine’s popularity (1982 and 1983), “Feedback Loop” frequently ran six pages long and answered twenty or more questions per column.

For example, one column in 1983 featured reader letters that dealt with:

I’ve enjoyed writing the column and will miss your many problems, questions, and creative solutions. Take care and keep on computing!