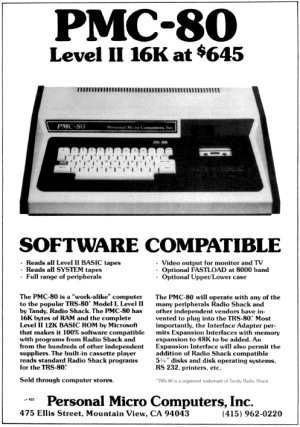 The PMC-80 was the North American version of a TRS-80 Model I clone that was created by EACA International Limited, a Hong Kong manufacturing company. Their Model I compatible computer was sold around the world by different distributors using different names. In Australia and New Zealand, it was the System 80. In Europe, it was the Video Genie. In the United States and Canada, it was the PMC-80, distributed by Personal Micro Computers.

Introduced in late 1980, the PMC-80 was originally priced at $645 with a 30-day money back guarantee. It was supposedly available only through mail order, but the Personal Micro Computers advertisements also stated “Sold through computer stores.” The PMC-80 was nearly 100% compatible with Model I software, in part because the ROMs were nearly identical. Some of the differences between the PMC-80 and the Model I included:

The PMC-80 is a “work-alike” computer to the popular TRS-80 Model I, Level II by Tandy, Radio Shack. The PMC-80 has 16K bytes of RAM and the complete Level II 12K BASIC ROM by Microsoft that makes it 100% software compatible with programs from Radio Shack and from the hundreds of other independent suppliers.

But an advertisement from March 1981 was less explicit about the TRS-80 connection:

When you buy PMC-80 you get hardware and software compatibility with the most popular microcomputer system in the world – that means thousands of disk and cassette based programs and all kinds of peripherals are instantly available! 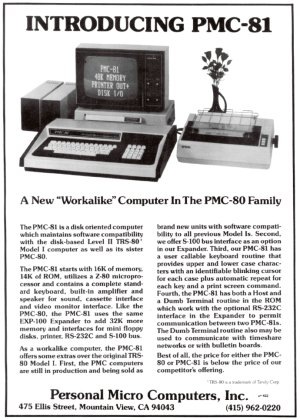 Personal Micro Computers later advertised the PMC-81, an updated version of the PMC-80:

The PMC-81 is a disk oriented computer that maintains software compatibility with the disk-based Level II TRS-80 Model I computer as well as its sister PMC-80.

The PMC-81 starts with 16K of memory, 14K of ROM, utilizes a Z-80 microprocessor and contains a complete standard keyboard, built-in amplifier and speaker for sound, cassette interface and video monitor interface. Like the PMC-80, the PMC-81 uses the same EXP-100 Expander to add 32K more memory and interfaces for mini floppy disks, printer, RS-232C and S-100 bus.

In 1981, Tandy sued Personal Micro Computers for copyright infringement. The lawsuit concerned the I/O routines in the PMC-80 ROM, which were largely copied from the Model I ROM. The BASIC portion of the ROM wasn’t an issue because EACA, like Tandy, licensed the BASIC from Microsoft.

Personal Micro Computers attempted to have the case dismissed, but was unsuccessful. The court ruling in Tandy’s favor was an important decision in early computer copyright law, helping to establish the concept that code in a ROM is protected by copyright. 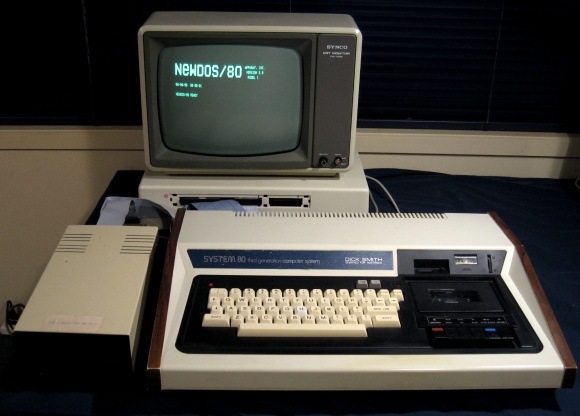 A “Blue-label” System 80, the EACA computer sold in Australia and New Zealand.
This is a later model than the original PMC-80 (notice the arrow keys)

Personal Micro Computers finally discontinued the PMC-80 and PMC-81 in late 1983 in favor of their new PMC MicroMate CP/M workstation. Some dealers, such as Vespa Computer Outlet, still advertised their remaining PMC-80’s for sale as late as 1985.

The System 80 and Video Genie continued to be sold outside of the United States for several years. Many of the incompatibility problems (such as the missing arrow keys) were fixed by subsequent versions. The System 80 is an interesting subject on its own and the best source for information is Terry Stewart’s excellent Tribute to Dick Smith’s System 80.

beautiful memories, my first computer. shame on these things we use today

Are you sure it wasn’t the RIGHT ARROW that was missing on the PMC-80? You can see from some photos on the net that there were ESC & CTRL keys where the UP/DOWN normally go, and BKSP where LEFT goes, and nothing where the RIGHT ARROW should go.

A friend of mine had an early System-80 and he definitely fitted a button where the RIGHT ARROW should have been. Tezza’s site also describes common mods to add CLEAR and RIGHT ARROW on the System-80.

That’s an excellent point. Even though several sources say the UP ARROW was missing, all examples I have seen are actually missing the RIGHT ARROW. It makes sense that the PMC-80 keyboard matched the System 80 and the RIGHT ARROW was the key missing. But it appears there were multiple versions of the PMC-80 keyboard, so we can’t be sure. I have adjusted the article to reflect this.