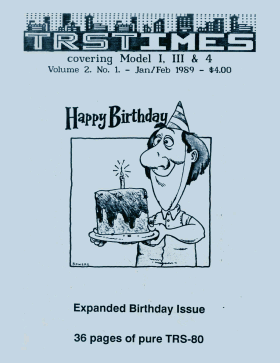 The first issue of TRSTimes was published in January 1988. Subscriptions to TRSTimes were always made on a full-year basis, with six issues published each year. This meant that Lance Wolstrup could make the decision to continue publishing on a year by year basis.

Although aimed at the hobbyist, the articles in TRSTimes covered a wide range of topics. Unlike many magazines, there were no continuing columns, although Beat the Game by Daniel Myers appeared in most issues. But there were many authors who wrote series of articles. Roy T. Beck wrote articles on many topics, including hard drives and printers. There was a frequent focus on programming, especially in the later years. This included C programming tutorials by Frank Slinkman and assembly language tutorials by Christopher Fara. There were even several articles about the Internet and TRS-80 emulators. 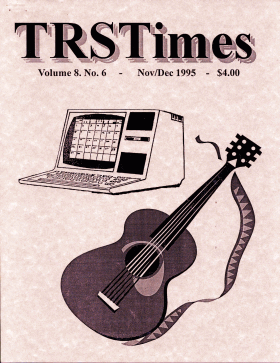 Lance Wolstrup decided to stop publishing TRSTimes after the November/December 1995 issue. TRSTimes had covered the TRS-80 for eight years, just as long as 80 Micro had. Lance Wolstrup’s final editorial ended with this poignant statement:

Therefore, it is with some sadness that I declare this to be the very last issue of TRSTimes. I hope that our readers have benefitted from reading our publication. My appreciation goes out to all the many people who, over the years, shared their knowledge with us, especially my good friend, Roy Beck, without those articles TRSTimes would not have lasted past the first year.