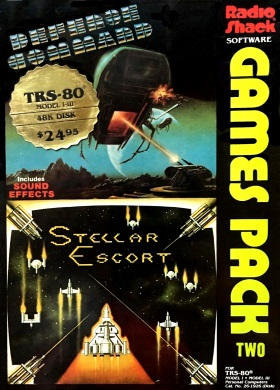 Both collections were sold on cassette and self-booting disk. Only minor modifications were made to the games, the biggest being that all copyright messages were changed to “Licensed to Tandy Corporation.”

The Games Pack Two manual contained different descriptions for the games than those used by Big Five Software. Here is their description for Defense Command:

The Kromorfkrom Empire has stolen our Krotnium Star Cruiser Fuel Cells. Your mission: Recover and hold the cells so our Star Cruisers can warp into the battle zone and return them to Earth. But beware — if the aliens reclaim the cells, they will unleash their most terrifying weapon … the Solar Waster!

Here is their description for Stellar Escort:

You must escort Federation Supply Cruisers through front-line enemy zones loaded with Cretonian vessels. Along the way, you will encounter merciless RAM CRAFT, indiscriminate CRUNCHER, and the awesome KILR MINES. Only the skilled will survive! 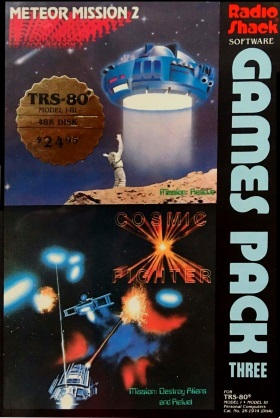 Here is their description for Cosmic Fighter:

From deep space they came, aliens from a far flung world. All that keeps Earth from being lasered into cosmic debris are an abandoned Fighter Ship and your nimble fingers at the keyboard or joystiuck. But can even Earth’s mightiest stand long against … the awesome Syborians?

Here is their description for Meteor Mission 2:

Six U.A.S.A. (Universal Aeronautics and Space Administration) astronauts have crashed on PHILO VII, a large, gravity-bearing asteroid. They’re waiting for your rescue shuttle to snatch them from their rocky perch. But a steady stream of asteroid fragments drifting between your shuttle and PHILO VII suggests that there may be endings other than happy ones …

The TRS-80 Model I and Model III games market collapsed around 1983, and Games Pack Two and Games Pack Three became one of the few ways to find classic Big Five Software games. They remained in the Radio Shack catalog until 1987 and were available until Cogito Software shut down in 1988.