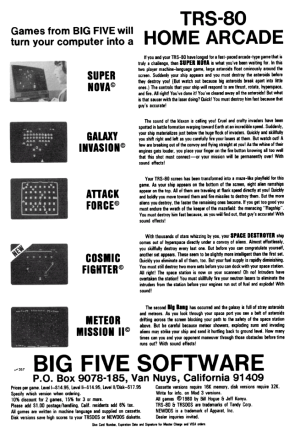 Cosmic Fighter was loosely based on Astro Fighter, which was released by Data East in 1980.

In many ways, Cosmic Fighter looks similar to Galaxy Invasion. However, the similarities are superficial and the games are very different. Your goal in Cosmic Fighter is to shoot the aliens as they descend from the top of the screen. Unlike Galaxy Invasion, you have a limited fuel supply which is used up as you move and shoot. A gauge at the top of the screen indicates how much fuel you have left. Your ship can be destroyed either by hitting an alien or shot or by simply running out of fuel. You are not likely to run out of fuel in the earlier levels of the game, but it does becomes an increasing problem in the later levels.

At the start of the game, an alien can be destroyed with a single one shot. In the later levels, it takes two or more shots to destroy an alien. 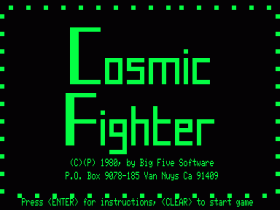 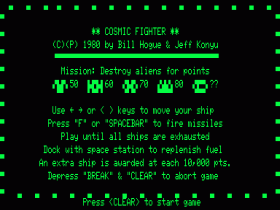 After finishing a certain number of waves, you are required to dock your ship with a space station in order to refuel. The space station emerges from the side of the screen. It’s a bad idea to try to destroy the space station; if even a single shot hits it, it will promptly destroy you. 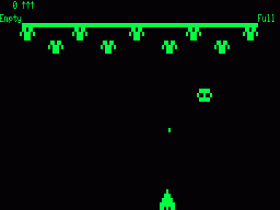 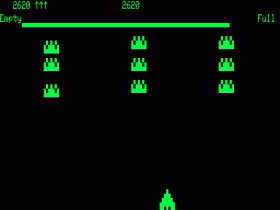 Another set of aliens

After a successfully docking, the game continues at a higher difficulty level. 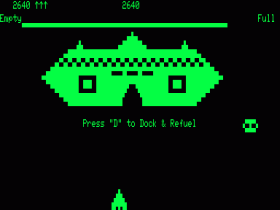 Ready to dock with the space station 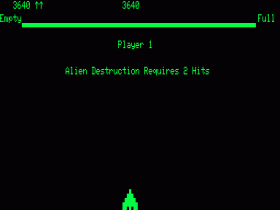 Starting again, but with greater difficulty

I loved Cosmic Fighter! I played it all the time on a TRS-80 clone.

I played it for over 12 hours a few times, but becuase it didn’t have a pause button, I had to teach my sisters how to dock with the mothership so I could use that time to run to the bathroom and/or the refrigerator!

Loved Cosmic fighter. With the game I had, when you broke 100,000 points a “laser” would write the word “COSMIC” across the screen with some amazing (for the time) sound effects and 3 beeps if I recall. Was this the standard release or a hack?

I remember Cosmic Fighter well! …and the many hours it took to rack up the great scores.

Check out my posts from a couple of years ago.

I can’t remember which game was the toughest – Cosmic Fighter or Meteor Mission.

Both were challenging (for that period of computer gaming).

Aren’t you glad we were a part of the early years of computing?

Scott, the “COSMIC” easter egg was from the standard release. I owned a retail copy of Cosmic Fighter (still have the tape, in fact), and I was totally amazed the first time I broke 100,000. It was quite some time later that I reached 200,000 points and was disappointed that there wasn’t another Easter Egg.

The 100K easter egg was so cool, but after 100K the aliens started shooting far more bullets at you, so it was much harder. BUT, I learned to survive the continuous fire, and…like Scott Buhr, I was disappointed that there was no similar surprise at 200K. “It must come at 1M” I thought. One night I played for 5.5 hours, and reached 1M points, and the only surprise there was that the score reset to 0, with the difficulty still just as high.