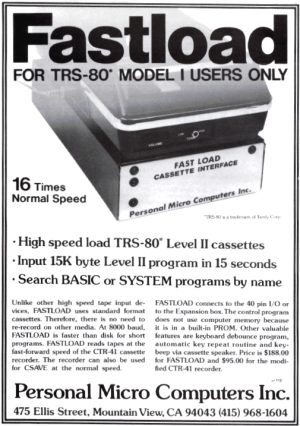 FASTLOAD advertisement from the September 1980 issue of 80 Microcomputing

The FASTLOAD cassette interface used a novel (and patented) method of speeding up loading cassette programs on a TRS-80 Model I. By using a specially modified cassette recorder permanently in fast-forward mode (the equivalent of the fast-forward button always being pressed), FASTLOAD increased cassette loading speeds up to sixteen times to as high as 8000 baud. FASTLOAD was introduced in 1981 by Personal Micro Computers, Inc. (also known as PMC) for a price of $188.00. The modified CTR-41 cassette recorder, required to use FASTLOAD, cost $95.00. Personal Micro Computers also sold FASTLOAD as an option for their PMC-80 and PMC-81 Model I compatible computers.

The FASTLOAD cassette interface connected to the Model I I/O connector and used a built-in ROM to add a new cassette loading routine (mapped to the LOAD command), keyboard debounce routine, automatic key repeat, and a key click feature. Upon startup, a single SYSTEM command was required to enable the FASTLOAD interface routines.

Saving to cassette (using CSAVE) worked the same as before and offered no speed advantage. But the new LOAD command could load programs at around 1K per second, a speed which was competitive with disk for small programs. The FASTLOAD interface was unique among TRS-80 cassette speed-up products in that it used the exact same cassette format as Level II BASIC. No conversions of existing programs were required and pre-recorded cassettes worked fine with FASTLOAD.

Although I can’t find any information to confirm this, Personal Micro Computers may also have used the FASTLOAD technology in their EPS-80 (Electric Pencil System) word processing system. The EPS-80, which was a modified PMC-80 with the Electric Pencil word processor in ROM, could access its built-in cassette recorder at 4000 baud.

Does anyone reading this have access to one of these rarities? I wonder if they looked just like the PMC-80.