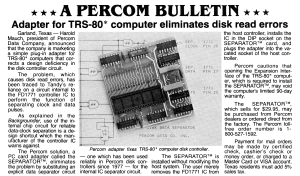 Percom advertisement from the August 1980 issue of 80 Microcomputing

The Radio Shack Expansion Interface added single-density floppy disk support to the TRS-80 Model I. Floppy disks were a great improvement over cassettes. But many people reported problems with reliability, particularly when reading or writing lower disk tracks. CRC errors and locked out tracks occurred with disturbing regularity.

The Separator, sold by Percom for $29.95, fixed all of those problems. It provided a data separator with far higher resolution (16 MHz) than the separator used by the Expansion Interface (1 MHz). Good data separation was vital for isolating the clock and data pulses that made up a disk track.

More explanation of why this was so important was given in the Percom Separator manual:

Installation of the Separator required no soldering and only five steps:

The Separator was a popular item and Percom continued to sell it for many years. Its superior data separation was later integrated into Percom’s double-density add-on, the Percom Doubler.

This brings back memories. When I first got my Expansion Interface, half the disks I bought wouldn’t format without errors. But after I installed my Percom Separator, every single one formatted. It was a great piece of hardware.

What interests me is that the data read/write problem with the off-the-shelf expansion unit seemed so obvious. Why did Tandy allow something that only half-worked to be sold in the first place, and why didn’t they fix it themselves?

Terry: Companies in the early 80’s regularly shipped computers which had serious problems in one or more areas. I formed a company and made a very good living for many years selling products which either fixed the problems, such as with disk controllers, or replaced them, such as with the expansion interface, and also, which added features to the products which really should have been included in the first place or at least offered by the computer seller. I don’t know why they were willing to ship products with defects so readily, except that the technology was brand new, simple as it now seems, and the companies were not certain the market would continue to grow enough to justify the higher investment levels required for products to be successful in today’s markets (2009). I suspect that they let products be sold which were about one prototype away from “release to manufacturing” because they ran out of budgeted money in the new products departments, and the executive(s) who were in charge wouldn’t/couldn’t allocate more funds until the markets were proven out. New models were brought out fairly quickly for those times, fixing the problems of the originals, but unfortunately, they ALSO had similar defects in the new features added! But, it was interesting and quite “fun” for companies like mine, as we anxiously awaited the pre-announced deliveries of the first products from manufacturing, so we could put them through their paces and discover what was missing and/or defective, then, scramble to provide inexpensive fixes for the problems with our own products before other small companies could do it. It seems a bit “simplistic” to me now, but then, after 25 or so years of engineering, entrepreneuring, and so forth, I ought to feel that way, otherwise, I wouldn’t have improved during that time! (sorry for the personal comment there; I am enjoying this….) I am semi-retired now, but I hate it, and I am planning a new company like Holmes Engineering, so I can “have fun” and provide good products which solve the problems and missing features which seem still to be common with new products. No matter how glossy and impressive the industrial designs are, the manufacturers still seem to miss a lot of points when they decide how to create the products, and what to leave out or put in. I have a new technology which I developed during a several year long period when I couldn’t work due to some health problems; those who have seen it believe it is a big winner, but, I still have a lot to do with patents and industrial design (packaging, features, appearance, etc.). It will surprise a lot of technical people who told me early on that it couldn’t be done!

I worked at Percom during the late 70’s.

Radio Shack wasn’t the only one to have that kind of problem.

TI was having problems with the tape interface for the TI4 (I think that is what it was called) and came to us “off the record” for help getting it to work.

BTW Percom ended up supplying the power supplies to Tandy for their drives.

That was a magical time where there were no rules to go by.

we just figured it out as we went.