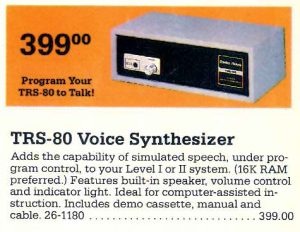 The TRS-80 Voice Synthesizer (catalog number 26-1180) was a speech synthesizer unit sold by Radio Shack. Introduced in 1979 for a price of $399.00, the unit was only compatible with the TRS-80 Model I; Radio Shack never sold a TRS-80 Model III version.

The TRS-80 Voice Synthesizer plugged directly into the Model I expansion port and worked with both Level I and Level II BASIC systems. Like most voice synthesizers at the time, it worked by outputting words already broken into phonemes, or very small units of sound. It was described this way by the product introduction (under the headline of “Your TRS-80 Speaks!"):

The new TRS-80 Voice Synthesizer gives your Level-I or II TRS-80 the capability of simulating human speech under program control.

There are 60 phonemes (elementary sounds) which, under your program’s control, are joined together by the computer to produce words. The words, in turn, may be joined together to form sentences. If you are writing an interactive program like the ones used in computer-assisted instruction, the Voice Synthesizer will allow you to verbally comment, clarify, and direct the program user.

This may seem far-fetched, but you’ll be convinced when you hear the demonstration cassette that comes with the Synthesizer! An instruction manual is also included.

Communicating with the unit was done in an unusual way. It “paralleled” thirty-two bytes of video memory, corresponding to the right half of the bottom screen line. Each phoneme was mapped to a different ASCII character and the synthesizer would speak any string of ASCII phonemes (bracketed by question marks) that was displayed on that part of the screen.

This odd method of addressing made it as easy as possible to output speech from a BASIC program. For example, the word “compute” could be spoken using this BASIC program line:

Although Radio Shack sold at least one program designed for the TRS-80 Voice Synthesizer (Talking Eliza, catalog number 26-1908) and a handful of third-party programs supported it (Hyperlight Patrol from Fantastic Software was a notable example), the unit was clearly intended for people who wanted to write their own talking programs. Here is another quote from the product introduction:

With the new Voice Synthesizer, in many interactive programs, you can substitute voice output for information you would otherwise have printed on the video screen.

And, if you’re really creative, you can try to develop a conversational program that will converse “intelligently” when it doesn’t know what you are going to say! We warn you, it’s not easy!

After you hear it, we’re sure you’ll agree that this is a peripheral right out of the next century!

Radio Shack sold the TRS-80 Voice Synthesizer until it was discontinued in 1983.

“Hello. This is the TRS-80 voice synthesizer demonstration. I can be programmed to speak any word by using phonemes. For example, the phonemes in the word compute are…” Ah, sweet memories of the old days. The synthesizer sounded like an Asian guy with a head cold, but it was still soooo cool. I never added speech to my own programs, but I did add to a few games, including Lance Micklus' “Trek III.4.”

This stuff is cool for the blind and low-vision.

But there is not any hardware such as this for newer computer systems.

There is not any sound in “BIOS” so many disabled computer user have no access to the BIOS for configuring their hardware.

And installing operating systems is impossible due to no audio.

I was fascinated with the Voice Synthesizer Demo that Crabby Night Owl quoted. Back in 1980, I brought a tape recorder into a Radio Shack store that always ran the demo on the TRS-80 Model I they had on display. I made a recording of the Voice Synthesizer Demo. That summer, I brought the tape to listen to when I was in camp. Unfortunately, some kid messed around with my tape recorder and erased the tape. I’ve been looking for a recording of that demo for the last 32 years. Does anyone have an audio recording of that?

The Radio Shack Voice Synthesizer wasn’t all that practical because you had to hard-code all the speech, so it’s only good for games with speech that have fixed sound bites. Robot Attack could have used it to have clearer speech than the crude digital sampled speech it had. But the VS-100 had a text-to-speech driver and could read actual English text.

Someone has come through for me and posted the Voice Synthesizer Demonstration Program!

I bugged my manager to get one of these when I worked at a Radio Shack in Reseda, Ca. It was a lot of fun. I wrote a program that had a bunch of pre-canned phrases you could quickly select by hitting different keys. I am somewhat embarrassed to admit that I used to crank call random people at night when the store wasn’t busy. When people would answer the phone I would have the voice synthesizer talk to them and tell them a computer was taking a survey. It was surprising how many people would play along!

As far as using that on Robot Attack, well, yeah, I suppose I could have done that. I don’t think Radio Shack sold enough of these devices to have have made it worth my time, though.

I purchased the Radio Shack store demo unit when it was on clearance. This voice synthesizer was great fun to play with. I added speech to several of my programs back in the day.

I have been thinking about creating a clone of it for my recently-purchased Model I, but the one piece of information I lack is the official list of TRS-80 characters (keyboard characters and I believe a few CHR$ codes) and their mappings to the Votrax SC-01-A phonemes. I have figured out most of them by looking at old code (e.g., + is NG, $ is TH, 6 is UH1, etc.), but not all. I think the user manual spent a page or two listing the mappings of the characters to the phone names. If anyone has a lead on where I could find that table, I’d be thrilled.

Thanks, Ian Mavrik, for supplying me with the original character-to-phoneme table.