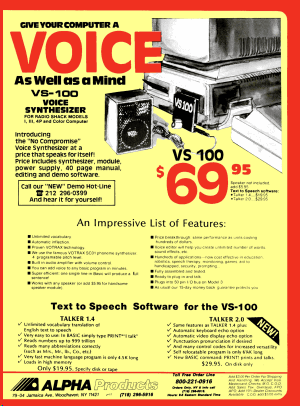 Alpha Products advertisement from the January 1985 issue of 80 Micro

The VS-100 was a 3″ by 5″ unit that connected to the expansion port of the Model I, Model III, or Model 4. It came with a power adapter, but not the required external speaker. Alpha Products sold a “handsome speaker module” separately for $5.95.

The VS-100 was based around the Votrax SC-01, a very common speech generation chip at the time. The Votrax SC-01 created speech by combined basic sounds called phonemes to create words. It could generate 64 phonemes at four different pitch levels. What made the speech generated by the SC-01 especially clear was the clever way it transitioned between phonemes.

In addition to demonstration programs, the VS-100 came with VSEDIT, a utility to create BASIC subroutines that directly accessed the VS-100. It also came with two versions of a text-to-speech program: VS32 (for 32K systems) and VS48 (for 48K systems). The software used four hundred pronunciation rules to convert English text to phonemes, with an estimated success rate of 90%.

Alpha Products also sold Talker, a more advanced text-to-speech program that was written by Kevin Tschudi. Talker 1.4, which cost $19.95, was only 4.5K long. Like VS32 and VS48, Talker hooked into BASIC and added the PRINT* command. **PRINT*** spoke text through the VS-100, but didn’t display it on screen. Talker 1.4 was available for both cassette and disk systems.

Talker 2.0, which cost $29.95, was a more advanced text-to-speech program. In addition to the features of Talker 1.4, Talker 2.0 added video display echo, improved translation rules, and the new PRINT! command. PRINT! spoke text through the VS-100 and also displayed it on screen. Unlike Talker 1.4, Talker 2.0 was only available for disk systems.

The final version of Talker was Talker 4.0, which cost $39.95, and added pitch control, among other features. Alpha Products advertised three other talking programs for the VS-100: Dr. Sigmund, Personality Test, and Talking Word Processor. Each program cost $29.95.

I got this board. My TRS-80 been up in my closet in a box for over 20 years I guess I just got it down and I have this board. From what I remember I got the parts and solder it all together. I could not remember what it did so looked on Google and found this web page. I don’t even remember it talking. I must of had it do that.