The philosophy at Percom is that a DOS for a microcomputer should make minimal demands on available resources while providing essential functions in accessing the disk. These functions include program save and load and a simple means of storing and retrieving data. Random access of the disk should be as easy to perform as sequential access.

MICRODOS was designed around these principles. Its requirements are small – less than 7K of memory and only 5% of a diskette. Once MICRODOS has been loaded into memory (by power-on or reset) it is no longer dependent on the disk for anything. This, along with the low memory requirement, makes a 16K one-disk system quite useful.

By 1981, Percom sold three different versions for the TRS-80:

Percom also sold OS-80 for the System 80, a TRS-80 clone which was popular outside of the United States. 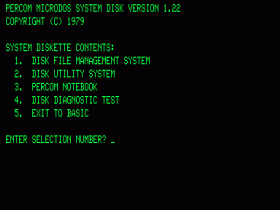 Although not as widely remembered as other TRS-80 operating systems, MICRODOS was quite popular within its own niche. Percom continued to advertise and sell MICRODOS well into 1982.