Radio Shack had been pushing the idea of connecting computers in schools since 1980 under the name “TRS-80 Network”:

The Network 4 was Radio Shack’s fourth “TRS-80 Network” product. The earlier products were:

The Network 2, Network 3, and Network 4 had different applications and were all sold simultaneously. 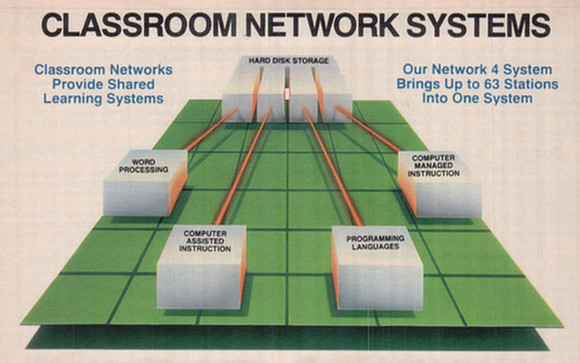 From a 1985 Radio Shack catalog

The Network 4, introduced in 1985, allowed even more computers to be connected in a computer lab. Here is a description from a 1985 advertisement:

The Network 4 Shared Learning System adds flexibility and economy to your computer lab or classroom. Using a twisted-pair cable, the Network 4 lets you connect up to 64 non-disk Model III or Model 4 student stations to a central host computer with a hard disk drive. The student stations can then share hard disk files, each station operating virtually as a stand-alone system. Each user can quickly access a set of teacher-designated programs and data files from the hard disk, information can be sent from station to station without using the hard disk, and reports can be printed on a printer at the host computer.

Although Radio Shack never mentioned the fact in their catalogs, the Network 4 was actually an implementation of Corvus Systems Omninet network. Omninet was an early networking standard that was designed to compete with the more expensive and bulkier Ethernet networks available at the time. Corvus sold Omninet cards for the Apple II and the IBM PC, among other computers. This meant that it was possible to connect non-TRS-80 computers to a Network 4 system, although I don’t know of anyone who actually tried to do that.

The host Model III or 4 was required to be equipped with a hard drive. This made it one of the few Model 4 applications that actually required a hard drive, rather than just worked better with one. For most applications, the host computer was also required to have a printer.

Each individual student computer could be a Model III, Model 4, or (later) a Tandy 1000. (Curiously, Radio Shack never offered any way for the TRS-80 Color Computer to work with the Network 4.) Each student computer also needed to have a Network 4 interface. Existing Model III and Model 4 computers could be upgraded using the Student Station Upgrade Kit (catalog number 26-1137) which cost $299.95 (not including required installation). As an alternative, Radio Shack sold the Non-Disk Model 4 Student Station (catalog number 26-1058) for $1099.00, which was a Model 4 already equipped with the Network 4 hardware.

Although successful initially, Omninet networking never became very popular. The cost and implementation problems with Ethernet networks were soon addressed, and Ethernet became the dominant network standard that it is today.1 Corvus Systems went bankrupt in 1987.

Radio Shack never sold a product to allow the Tandy 1000 to act as Network 4 host. This meant that every Network 4 had to have a Model 4 as host, even if all the other computers on the network were MS-DOS Tandy 1000’s. This also meant that Radio Shack had to continue to sell the Model 4 as long as they sold new Network 4 systems or schools maintained existing ones.

In the 1990 Radio Shack catalog, Network 4 was replaced by the SchoolMate network. SchoolMate was an MS-DOS system (based around DeskMate) which ran on an Ethernet or ARCNET network. Probably not coincidentally, the 1990 catalog also marked the final appearance of the TRS-80 Model 4D.

I have a Network 4 client station kit, but have never been able to find any of the software or documentation. Someone paid a silly amount on eBay for a binder and diskettes earlier this year, but apparently kept it to themselves.

i have original masters of network 4 for use with tandy hard drive and corvus hard drives.

a compay called FPS servies developed it for tandy and corvus