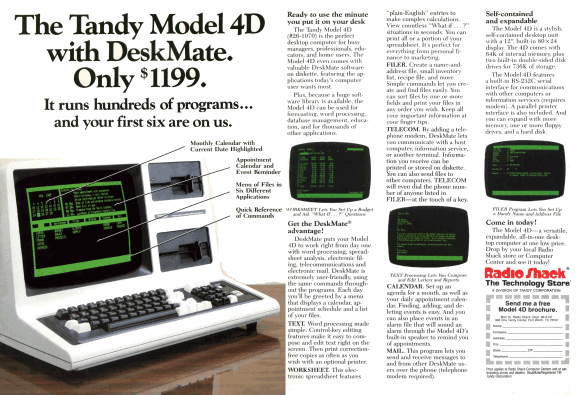 However, not all of these changes were unique to the Model 4D; some of them (such as the keyboard and green screen) were present in later Model 4’s.

Although early press announcements stated that the Model 4D would come with 128K of memory, this proved not to be true.

DeskMate, an integrated software package developed by Radio Shack, was included with the Model 4D. Although the MS-DOS version of DeskMate was the first and best known, Radio Shack also created versions for most of their computers. DeskMate for the Model 4 was also available for sale separately (catalog number 26-1608) for $199.95 (later $99.95).

Radio Shack marketing presented Model 4 DeskMate as the biggest selling point for the Model 4D. In fact, the D in 4D stood for DeskMate, not double-sided drives as most people imagined. DeskMate contained components for word processing, spreadsheet, database, communications, calendar, and electronic mail. Perhaps because of the mature state of the TRS-80 software market, DeskMate for the Model 4 was never very popular.

The introduction of the Model 4D came as a bit of a surprise to many observers. At the time, Radio Shack had been widely rumored to be on the verge of discontinuing the entire Model 4 line. According to Ron Stegall, Tandy senior vice president, the Model 4D was introduced partly to address those rumors. He stated in an interview with 80 Micro, “We intentionally came out the 4D including DeskMate to get rumors stopped.”

Unfortunately, the release of the Model 4D didn’t signal a new emphasis by Radio Shack on the Model 4 line. It continued to receive little to no promotion and Radio Shack made no secret of the fact that there were no plans to develop any new Model 4 software or hardware. In that same interview, Ron Stegall also stated, “Third party software for the 4 is a fact of life.” That was true but a thriving market for third party Model 4 software lasted into the late 1990’s.

The Model 4D appeared in Radio Shack catalogs until 1990. It’s not clear exactly when the Model 4D was discontinued because it could still be ordered from Radio Shack after it was no longer sold in stores. The February 1990 issue of Computer News 80 reported that Radio Shack still had “a warehouse full of Model 4D’s and two warehouses full of unassembled parts.” Both continuing education sales (a Model 4 was required to control the Network 4 classroom networking system) and niche interest meant that sales continued longer than Radio Shack had intended.

I just picked up one of these at my local thrift store. You stated in here “Although early press announcements stated that the Model 4D would come with 128K of memory, this proved not to be true.”, on the right hand side, underneath the reset button, mine has a tab that states “128k RAM”

Although Radio Shack only sold the Model 4D in a 64K version, they did sell an expansion kit (catalog number 26-1122) to expand it to 128K. As part of the installation of that kit, the Radio Shack technician would replace the standard 64K label with a 128K label. It sounds as though your Model 4D had an official memory expansion.

Those “later Model 4s” with the green screen and new keyboard are known as the Gate Array Model 4s. They were distinguished by the suffix “A” appended to the RS cat#; i.e. 26-1069A for the GA Model 4. The keyboards had not only a backspace key, but the arrow keys were collected into a single cluster of four. The NGA Model 4s have two arrow keys on each side of the keyboard. Many veteran TRS gamers were perturbed at the new arrangement!

Furthermore, the GA CPU board contained all the computer’s digital electronics. The old NGA machines had separate circuit boards for the Floppy Disk Controller and the RS-232 serial port circuitry. THAT’s why the DB-25 connector for the RS-232 port points out the back of the cabinet, not down.

For the techies, the old NGA Model 4s did not truly run at the advertised 4 megahertz clock speed; the use of slow logic chips necessitated the insertion of wait states into the Z-80 bus cycle that yielded an effective clock rate of only 3.5 Mhz (approximately). The GA logic board fixed that. This is the reason the NGA Model 4s have more trouble handling speedup mods and the XLR8er board. It also makes running asm code in the banks far more trickier because the Z-80 M1 machine cycle has more stringent timing requirements.

On a personal note, I think it’s a shame Tandy didn’t at least offer a hot-rod version of the Model 4D as a going-away gesture to the grand old TRS-80 line. They could have substituted 720K 3.5" drives and the graphics board very easily. Just a bit more work could have resulted in the use of the 8 Mhz Z-80H, and 256K DRAMs in the 4164 sockets. Tweaking LS-DOS to handle the extra banks would’ve been a snap. Incidentally I have two machines in my possession with just this configuration, except I’m limited to 7 Mhz with the GA board. Though I did piggyback the 41256s for a full meggerbyte with 32 banks!