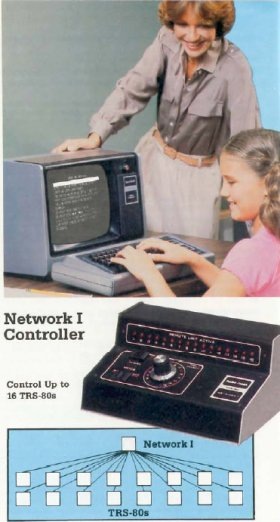 From a 1981 Radio Shack catalog

The Network I Controller is a low cost alternative to the cassette recorder for saving and loading programs in a classroom environment. The Network I allows from one to sixteen TRS-80 Model I’s to be connected to a central Model I disk system. Transfer between units is via the cassette ports using CLOAD and CSAVE.

Because the Network I used standard BASIC commands to communicate between computers, no extra software was required. Although not documented by Radio Shack, many teachers devised custom procedures to send machine language programs as well.

In later Radio Shack catalogs, the Network 2 Controller was listed as compatible with the Model I, Model III, Model 4, Color Computer, MC-10, and Model 100. There were a number of possible network configurations:

There were also two configurations suitable only for transferring ASCII text files:

Despite the similar names, the Network 2 had little relationship to Radio Shack’s later networking products, the Network 3 and Network 4, and they were all sold simultaneously. Radio Shack listed the Network 2 in their catalog until 1987, although they continued to sell it to schools for several years after that.

hay guys, I worked for radio shack during the heyday’s of micro-computing from 1981 on and was also there at the end. I worked in the computer centers, later business centers, computer repair shop, and graduated to Senior Systems Engineer. I still have a model 100 and trs-80 model III. I think I still have some manuals and other documentation in storage. I was thinking of starting a museum. Ha Ha.

In the early 80s I was given $40,000 to put a computer network into my middle school library. One of my fondest memories working with TRS-80s.