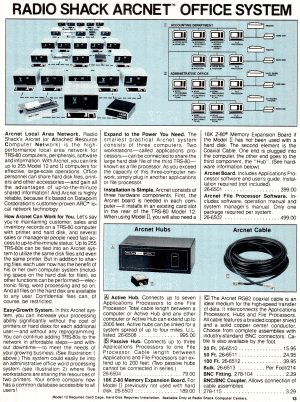 In 1981, Radio Shack standardized on ARCNET as a networking standard. From the news article “Tandy Picks ARCNET” in the December 1981 issue of 80 Microcomputing:

The Fort Worth, TX firm has announced it will use ARCNET—a series of protocols and software developed by Datapoint—to link Model II’s and future Radio Shack computers into large scale systems.

Jon Shirley, vice president of computer merchandising for Radio Shack, added: “In concept and operation, ARCNET is similar to Ethernet, but unlike Ethernet, ARCNET is based on a proven, reliable technique with over four years of field operation.”

Their implementation, known as “Radio Shack ARCNET,” consisted of hardware for the TRS-80 Model II/12/16/6000 series and later for the Model 2000 and Model 1000/1200/3000 MS-DOS computers. Although ARCNET add-ons were planned (and announced) for the Model III and 4, they were never released. Two remnants of that planned support are the four reserved ARCNET functions in TRSDOS 6 (labeled “Reserved for ARCNET use” in the Programmer’s Guide to TRSDOS 6) and an ARCNET boot error message in the Model 4P ROM.

Prices for Ethernet hardware started to fall during the mid-1980’s as more companies began selling Ethernet hardware. Before long, ARCNET had been completely replaced by Ethernet for computer networking. Radio Shack continued to list ARCNET hardware (including a Western Digital implementation called ViaNet) in their catalogs until at least 1991. Although no longer used by personal computers, ARCNET is still commonly used as a networking system by embedded systems and robots.