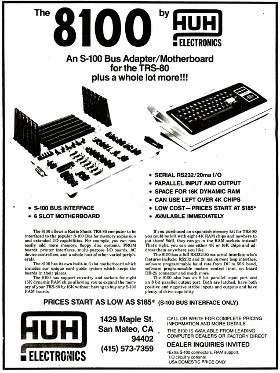 The S-100 bus standard was created by MITS in 1975 for their Altair 8800 computer. The Altair 8800 was designed with one mainboard with five 100-pin edge connectors. These connectors were used to attach the CPU, memory, and other peripherals to the Altair. These connectors followed a standard that became known as the “Altair bus."1 Many people started creating and selling hardware designed to plug into the Altair bus. Competing computers, such as the IMSAI 8800, also used the standard, but under the name “S-100 bus.”

Despite some problems, the S-100 bus was flexible enough to act as a connection standard for the rapidly expanding computer market. It even provided interrupt and direct memory access lines not used by the Altair 8800, but available for use by later computers.

Due to its popularity, S-100 bus support was considered for the original design of the TRS-80 Model I. It was rejected as being too expensive to implement in a low-cost computer. Instead, the Model I offered a proprietary expansion port that could be used to attach external hardware such as the Radio Shack Expansion Interface.

The HUH Electronics models had good compatibility with S-100 hardware. For example, a review in 80 U.S. Journal noted that the MicroSounder from American Micro Products and the Percom CI-812 worked without problems. There were a few exceptions:

The biggest compatibility problem was the lack of direct memory access. This ruled out some popular hardware such as the Dazzler from Cromemco.

The HUH Electronics Model 8100 was probably the most direct target of the World Power Systems fraud. World Power Systems ran advertisements in 1979 listing the “TRS-80 to S-100 Bus Cable Adapter” (equivalent to the Mini-8100S) for $119.95 assembled. Their equally non-existent “TRS-80 to S-100 Bus Model RSB-A” (equivalent to the 8100) cost $289.95 assembled and came with a case and power supply (unlike the 8100 which came with neither.) According to the advertisement, the Model RSB-A generated S-100 signals “fully compatible with the TRS-80."2