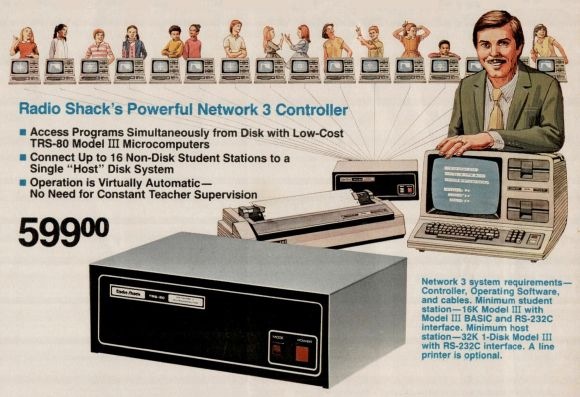 From a 1983 Radio Shack catalog

Instead of the cassette port connections used by the earlier Network I and Network 2 Controllers, the Network 3 Controller used RS-232 cables. This was both faster and more flexible than cassette port communications but did require that all the computers have an RS-232 interface installed. For schools without compatible student computers, Radio Shack sold the $1249.00 (later $899.00) Network 3-Compatible TRS-80 Model 4 Student Station (catalog number 26-1059) which came “complete and ready to use.”

Permits student stations to SAVE and LOAD programs directly to and from the host disk and LLIST and LPRINT to the host printer. Printer access requests are “spooled” at the host until the printer is free, so pupils can move on to the next project without delay.

Radio Shack sold a wide selection of educational software designed for the Network 3, including:

Prices for these packages ranged from $40 to $200, depending on their complexity. Radio Shack also sold additional tools, such as the TRS-80 Network 3 Lesson Presentation Package (catalog number 26-2713) a $239.00 utility that “allows you to use our Network 3 Controller to present lessons created with TRS-80 AUTHOR I.” Some third-party software, such as New Classics Software’s Pascal 80, had special versions that supported the Network 3. Radio Shack sold the Network 3 version on Pascal-80 as Network Pascal (catalog number 26-2739) for $799.00.

Despite the name, the Network 3 Controller didn’t replace the earlier Network 2 Controller. They appeared together (along with the later Network 4) in Radio Shack catalogs until 1987.