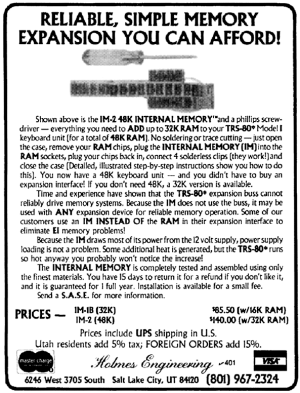 Although the TRS-80 Model I supported up to 48K of memory, there were only sockets for 16K within the Model I itself. The only official way to add more memory was to buy the Radio Shack Expansion Interface, which had sockets for an additional 32K of memory, for 48K in total. The Expansion Interface (without any memory) cost $299.00, making any kind of official memory expansion very expensive.

The other important feature of the Expansion Interface was the built-in floppy disk controller. But not everyone was interested in or could afford floppy drives, which cost hundreds of dollars per drive. Many people used cassettes or other alternative storage devices, such as the Exatron Stringy Floppy, the JPC Products TC-8, or the BETA-80. What option was there for the Model I user who wanted to maximize memory but without the extras (and expense) of the Expansion Interface?

Those prices were without memory, but Holmes Engineering also sold the Internal Memory with memory pre-installed. Memory prices varied with the market, but ranged from $20.00 to $30.00 per 16K.

The Internal Memory came with a well-written ten page manual which clearly described the installation procedure. The Internal Memory board plugged directly into the Model I main board. Soldering and trace-cutting were avoided by attaching micro-clips to specific pins on the Model I. The instructions were straightforward, but any user who wasn’t comfortable could have Holmes Engineering install the Internal Memory for $20.00 (including shipping).