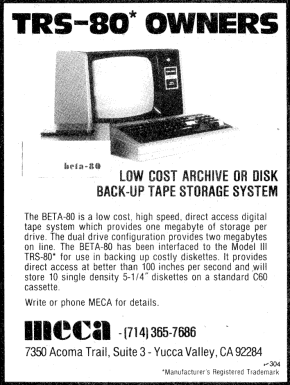 MECA advertisement from the May 1982 issue of 80 Microcomputing

The BETA-80 was an “intelligent” cassette tape system that could store up to one megabyte on a single digital tape cassette. It was sold by MECA as an alternative to an Expansion Interface and disk drives. MECA sold versions of their digital tape systems for a number of computers using different names:

The BETA-80 was a fairly small unit, measuring around 8″ by 4″ and weighing about six pounds. The cassette tape was inserted at the top and there was an on/off switch on the back. The BETA-80 didn’t require an Expansion Interface but plugged directly into the Model I I/O bus. Up to four BETA-80 drives could be installed at one time.

The BETA-80 booted in a similar manner to a disk system. It took about twenty seconds to load its operating system, which occupied 3.5K of RAM. Unlike the approach taken by the Exatron Stringy Floppy, the BETA-80 operating system used standard Disk BASIC commands such as LOAD, SAVE, MERGE, and KILL.

In addition to the operating system, the BETA-80 came with a debugger, demonstration programs, and a Star Trek game. MECA sold patches to Scripsit that added support for saving and loading documents on the BETA-80. They also sold a special BETA-80 specific version of Microsoft Level III BASIC.

Very little TRS-80 software was sold on BETA-80 cassettes. The typical usage of the BETA-80 was to transfer ordinary cassette programs to BETA-80 cassettes to use the superior speed and file handling features.

Like an ordinary cassette system, the BETA-80 recorded data on cassette tapes. Digital cassettes were recommended, although some people reported good results using high-quality audio cassettes. But unlike an ordinary cassette system, the BETA-80 automatically controlled tape positioning, recording, and playing. The transfer speed was also much higher, at around 2500 bits per second in single-density and 5000 bits per second in double-density.

Each tape contained two tracks, and up to 256K (single-density) or 512K (double-density) could be stored per track. Each track could store up to 66 files (with five character filenames) for a total of 132 files per tape.

Tape positioning was handled entirely by the BETA-80 itself; the maximum time to position to any file was thirty-six seconds and the average time was ten seconds. Not including positioning time, a 16K file took 27 seconds to load in double-density mode.