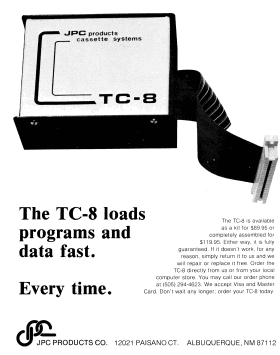 JPC Products advertisement from the March 1981 issue of 80 Microcomputing

The TC-8 Cassette System was a hardware add-on from JPC Products that provided faster and more reliable cassette storage for the TRS-80 Model I. Advertised as “The Poor Man’s Floppy”, the TC-8 provided features similar in many ways to the Exatron Stringy Floppy. The TC-8 could store up to 300K on an single 30 minute cassette tape. It increased the standard TRS-80 cassette data rate from 500 baud to nearly 3000 baud. It also promised much greater reliability, “less than one bad load in a million bytes.”

The TC-8 was derived from the TC-3, a similar cassette system that JPC Products created in 1978 for computers based on the Motorola 6800 processor. When introduced in 1980, the TC-8 cost $69.95 for a kit and a $99.95 for a fully assembled version. Those prices soon increased to $89.95 for the kit and $119.95 for the fully assembled version. The JPC Products advertisements recommended that buyers consider the kit version, saying:

It is very easy to build. It should only take you an hour or so. Even if you have never built a kit before, you can build the TC-8.

If you can get toothpaste on a toothbrush, you can learn to solder. Our instruction manual will show you how.

JPC backed up that recommendation with their “Can’t Fail” guarantee, saying:

If you build the TC-8 and for any reason it doesn’t work, we will make it work at NO COST. All you have to pay is the shipping. We guarantee it!

The TC-8 plugged directly into the Model I expansion bus and a cassette recorder plugged into the TC-8. Unlike the Exatron Stringy Floppy (which had its utility routines located in ROM), the TC-8 software wasn’t always present and needed to be reloaded from cassette each time the Model I was started.

The TC-8 was for the Model I only; JPC Products never created a version for the Model III. In late 1982, JPC Products replaced the Model I version of the TC-8 in their advertisements with a new model for the TRS-80 Color Computer. The new version, known as the TC-8C, provided the same speed and reliability, but extended the software to include the JBUG monitor. JBUG was a machine language monitor that offered assembly and disassembly features.