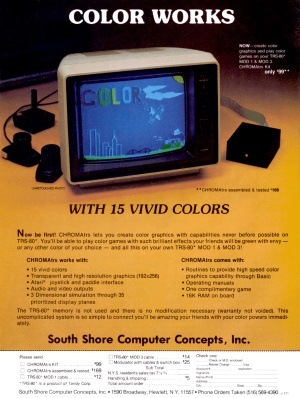 CHROMAtrs advertisement from the November 1982 issue of 80 Micro

The most popular of the TRS-80 Model I and Model III color add-ons was the CHROMAtrs, introduced by South Shore Computer Concepts in 1982. It was available in several different configurations:

The CHROMAtrs came with a full 16K of memory, allowing the highest resolution to be displayed without any further memory expansion. Each unit supported both the Model I or Model III and would work with either computer using the proper cable. The Model III cable would also work with the Lobo MAX-80 with a few minor modifications.

The core of the CHROMAtrs was the Texas Instruments TMS9918A graphics controller, the same chip used by the ColecoVision, the TI-99/4, and a number of other systems at the time. It supported a total of four video modes: one 40 by 24 text mode and three graphics modes. The maximum screen resolution was 256 by 192, the same as the TRS-80 Color Computer and nearly as high as the 280 by 192 of the Apple II. Sixteen colors (including transparent) were possible on a color television or eight shades of gray on a black and white television.

Another interesting feature of the CHROMAtrs (actually of the TMS9918A controller) was prioritized sprites. Up to 32 sprites could be displayed on screen at once and all display details were automatically handled by the controller. The sprites could even pass in front of one another, with the higher priority sprites overlapping the lower priority ones.

Two features unique to the CHROMAtrs among TRS-80 color add-ons were sound generation and joystick support. The sound, although fairly simple, could be heard either on the television or through a separate RCA jack. Two joystick connectors supported Atari joysticks or paddle controllers.

Each CHROMAtrs came with a software driver, a version of LOGO, and a game to help show off the color graphics. South Shore sold a number of CHROMAtrs programs, including CHROMA BASIC, a very impressive color graphics BASIC which originally cost $30.00 but soon was bundled with the CHROMAtrs. Upon request, they would also send a list that they maintained of third-party CHROMAtrs programs. By the end of 1983, South Shore Computer Concepts changed their name to Micro Control Systems, Inc., but they continued to sell the CHROMAtrs.

I worked for South Shore Computer Concepts in 1982 and 1983. I assembled a few of them and debugged more. I probably still have one in a closet somewhere. I know that I have the keyboard/CPU unit from my own Model I.

I worked with the author of CHROMA Basic, who was a (shockingly) young student from Kentucky. Thanks for the memories.

Does anyone have any documentation for the CHROMAtrs (and the other similar colour add-ons)? I’d be particularly interested in the schematics, user/programmer manual, and the driver software.

I’d like to implement this (and perhaps the other TMS9918A-based add-ons) in my FPGA TRS-80. But I have no idea how it was interfaced to the TRS-80 (memory/port map(s) etc). I’m surprised none of the software emulation authors have added these products. I do know MAME/MESS already has a TMS9918A core… so adding it to MESS would be a no-brainer…

The CHROMAtrs was mapped to ports 78H to 7FH, although the base address could be changed using a jumper. I don’t know which of the ports mapped to the TMS9918A and which mapped to the sound and the joysticks.

I have thought before about adding CHROMAtrs support to my TRS-80 emulators, but the lack of software is a problem. It would be fairly easy to reverse engineer the CHROMAtrs hardware if any of the software was still available.

Wow, I just ran across this web page by accident. I’m the “shockingly young student from Kentucky” that StevenHB referred to above. I was 14 when I wrote and sold Chroma BASIC to South Shore, and I still remember it well. I also remember writing a Pacman-equivalent and some other games. I would be thrilled to hear from anyone else from South Shore or any users of the product.

I wrote some game programs for my own use in Z-80 assembler that used the CHROMAtrs. Stuff like a parachute jump program, the plane would be one sprite in the 9918, the little person and the chute were two others. I had a WICO joystick and trackball hooked to mine.

I recall the trackball either drew too much power and made the CHROMAtrs unreliable or the 5V wasn’t provided on the atari-compatible port, can’t remember which, so I tapped 5V off somewhere else and ran a wire to the joystick port so I could use it.

I remember using the CHROMAtrs from BASIC, Z-80, small C, and FORTH.

I also ported some Applesoft BASIC graphics programs from Creative Computing to the TRS-80/CHROMAtrs.

Good times when I was in highschool, sometimes I wish I still had all that old hardware, but there’s just not enough time anymore.

Later I remember porting some of these old programs to the Amiga 1000 when I got one of those with money from my first “real” engineering job.

If you have any software listings Ben, that’d help with reverse-engineering?!?

South Shore was lucky to get Robert French to write ChromaBasic. At Thirteen he could program circles around anybody. And he could type unbelievably fast too.

Hi Rob. Here is my story on the ChromaTRS. I bought mine in the form of the $99 kit. I still have it too. I bought my Model I in 1978. by the time ChromaTRS came around I was pretty good at hardware hacking. One of the mods I made to the Model I, was something i called

the Re-Mapper which was an amazingly simple mod to run a real CPM. I never got around to publishing it, but 80-Micro would have loved it. Basically a bit on port 7E, toggle a JK-flipflop that triggered an XOR on A14 and A15. Magically the ROM moved from 0000-3FFF to C000-FFFF and the RAM from that location moved to 0000. And all your code from 4000-BFFF stayed there. It made booting CP/M a snap. The mod was as easy as the reverse video mod. In the end; my Model I had 192K RAM bank-switch CP/M mod, swap RAM for ROM mod, speed up mod, reverse video mod, lower case mod, and a ChromaTRS. I showed the ChromaTRS to Rob and said you should take your RF-Extended Basic and re-write it for the ChromaTRS which he did. He even did the 3D commands as a favor to me. Geeze we are talking sines and cosines in assembly language here. It was very impressive. My hat is off to the people at South Shore for making a great expansion device, and to Rob for coding up such a cool language.

I am the co-inventor of the ChromaTRS! It was conceived by me, and designed by myself and Art Lekstutis while we both worked at South Shore Computer Concepts. Laura Logan (aka Laura Friedman!) designed the PCB. I was cleaning out my garage last summer and came across the first production unit and the original advertising 8×10 glossy photos used in the ad at the top of this page. I also wrote the assembly language drivers for the board, a crude Paint program and drew the lousy graphic used in the ad.

Back in “the day” I was a huge TRS-80 fanatic, and owned a Model 1 with serial number 96 (and all subsequent models through the 4P). It had more jumpers on the PCB than actual traces and never could be upgraded to Level 2. Unfortunately I no longer have that unit. I am also the author of the RATS BBS system for the TRS-80, which was later taken over by Eric Greene and known as the Greene Machine. There were thousands of both versions given away back in the late 70s and early 80s. Later I worked as a systems programmer on Rising Star Industries' “Valdocs” software for the Epson QX-10 and also designed a version of the ChromaTRS for the QX-10 sold by DX Computer Company. That version used an updated TDL Basic language for programming with the color graphics added in by Russ Pillsbury. Ah…those were the days.

Someone above was looking for schematics for the ChromaTRS, and I may have a set. I’ll have to dig deep into my archives. If I do have them, they predate computer schematic capture and will be hand drawn, so the best case will be a careful photograph of the C or D sized print. No promises. I don’t recall having any copies of the owners manuals around, but a lot of my paperwork from that era was destroyed in a flood way back in 1987.

BTW: I found this site via a link from a Time Magazine article on the 50th anniversary of the BASIC programming language: https://time.com/69316/basic/ The article was a blast from the past with lots of good TRS-80 references.

I worked in the group that developed the CHROMAtrs at SSCC. Mike mentioned this website to me, and after digging around I found some of my old documentation (manual, schematic and datasheets). I’ll keep what I can find on my website for those that might be interested:

It was a lot of fun working on that project and it was really great working with all the people involved!

If people have diskettes with ChromaTRS sample code please send them to Ira at the trs-80.com site to get converted. With several good app examples it’s a lot more reasonable that we might ever see this hardware emulated well. (Without them there is little point.)