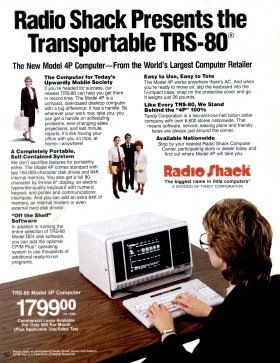 Radio Shack advertisement from the January 1984 issue of Basic Computing

Advertised as “a microcomputer worth carrying about” the Model 4P was introduced this way in a 1984 Radio Shack catalog:

Now get the versatility of our popular TRS-80 Model 4 desktop computer in a compact system you can take anywhere! The Model 4P is easy to carry—and it’s small enough to stow in overhead luggage racks on planes, trains, or buses. It’s the perfect computer for our mobile society!

The Model 4P offered complete Model 4 compatibility, but in a transportable package with a carry handle. It weighed only 26 pounds and featured a 9 inch screen, two floppy disk drives, and a detachable keyboard with a 16 inch cable that stored below the screen.

In addition to the transportable form factor, the Model 4P differed from the Model 4 in several other ways:

There were several other advantages to the Model 4P boot ROM approach:

Because of the advantages, this same boot ROM approach would have been used by any “Model 5” developed to succeed the Model 4.

Radio Shack sold a number of optional accessories for the Model 4P, including:

Although the Model 4P was much loved by owners, Radio Shack never really managed to successfully promote the computer. Eric Maloney, editor-in-chief of 80 Micro, described the Model 4P as “the computer Tandy forgot that it had made.”

I prefer the form factor of the Model III and Model IV, and in fact my main TRS-80 system is a fairly maxed out IV, but there’s no denying the easier maneuverability of the 4P, and unlike many transportables (Osborne 1, SX-64, etc.), it maintains a nice screen size.

This is the first I’ve heard of Tandy thinking about a Model 5 at one point. I hope a future blog post from you covers that. I can only assume that they were thinking things like a standard hi-res board, but in color, and either two HD disk drives or one HD disk drive, and a small hard drive. I can assume that their plans for the Tandy 1000 (and to a lesser degree the Coco 3) pretty much put an end to any thoughts of releasing a 5…

I owned a Model 4P, bought for me by my father, which I used throughout my Computing Science degree. Bought a Grafyx Solution hires board (which – incidently – I’m in the process of reverse-engineering) and actually used it to prototype my Computer Graphics ray tracing assigment! Yup, the old sphere on a checkerboard, written in Turbo Pascal under Montezuma CP/M 2.2 with my own graphics library, in glorious dithered monochrome! Took all night to run, too!

It was fantastic to take to the SYDTRUG meetings – sure beat packing up my father’s Model I and LNW expansion interface & monitor in a home-made wooden box! And unlike the above-mentioned, the 4P tended not to need repairing after it was unpacked, too! ;)

Right now, it’s sitting on a desk at work, pulled apart; third time I’ve had video problems with it. It’s in awfully shabby condition atm – ironically my most treasured piece of my retro collection yet also the most neglected.

One nice thing about the 4P that seldom gets mentioned is that the phosphor dots on the 9-inch CRT are packed closer together than on the 12-inch Model 4 CRT. Smaller screen, but same pixel resolution 640 x 240. Makes for crisper-looking text and graphics, if one’s eyesight is still good enough to resolve the smaller characters.

One wonders how the 4P might have fared had Tandy brought it to market a bit sooner than they did, considering the success of the vastly inferior Osbornes and Kaypros. One thing those computers did have going for them, however, was the bundled Micropro applications. And the best Tandy could ever do for the 4 was the anemic Deskmate. Still, the 4P’s 9-inch CRT versus their 5- and 7-inch CRTs would have made for a difficult purchase decision.

One other minor difference between the portable and the desktop 4s was that the 4P had an internal fan, necessitated by its compact design. It lacked the internal free space for the desktop 4’s convection cooling system. Added a little noise factor to the user experience, but still not too bothersome.

The Rad Shack internal modem card for the 4P was only 300 baud, and used the proprietary Rad Shack software command codes. A little later on, a company called Teletrends marketed a 1200 baud Hayes-compatible card, advertised in 80 Micro and later marketed by Misosys (thanks, Roy!). I think it was $160 at first and came down to around $100 at the end. Worked good.

Can’t dig why the 4P proved so unpopular in the marketplace; it was a solid righteous machine. Probably price and lack of bundled software. I recall Rad Shack closed them out in April 1985 for $600. Too bad I only had enough bucks to snap up one of them, but I recently got six of them on EBay over 2009-2010. For about $100 each, gate arrays in good shape (except for drives, but I have a shelf full of unused 3.5" puppies that’ll go in when I get the time). Expect my fleet of 4Ps to soldier on for at least another decade or so!

I used to work / sell TRS-80’s at a ma/pa electronics store in Western Kansas. I also did minor work on the TRS-80’s. I fell in love with the 4-P and purchased one when they first came out. I later purchased a used 5-meg hard drive from RS for a song – bundled with a used Model 4. I obtained a code mod from the magazine TRS-80 micro (I think?) that allowed me to boot directly from the hard drive. (Note, nice feature about the hard drive – the same size as the cpu box for IBM computers- was a red button that allowed you to protect the hard drive so no data could be written to it.). I later upgraded the original 4P to a later model that had a green screen and the new ‘Gate Array’ cpu board that contained many fewer parts. I also discovered (even though RS tech support told me it wasn’t supported) the the disk controller supported double sided diskettes. I quickly re-drilled the mounting holes in the aluminum drive box and mounted Tandy 1000 Double sided dual density disk drives in my ‘New’ 4-P. This gave me the equivently of 4 floppy drives as well as the 5-meg hard drive and and unbelieveable 128K of memory. I miss that machine…..

Loved my 4p. Had it coupled up to 3 x 15meg hard drives. Tandy UK replaced the floppy drives, due to fault, with double sided TEACs. Really good drives. I used this well into the late 1990s until I finally decided to go PC due the 4p finally giving up and didn’t have knowledge to fix it or know anyone who had either. My Video Genie outlasted the 4p and was still working right up until I junked it in year 2005.