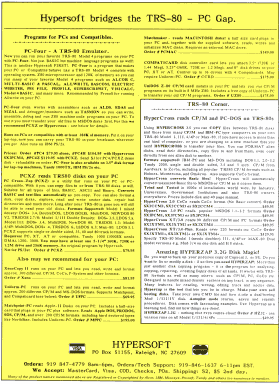 Hypersoft advertisement from the March 1988 issue of 80 Micro

PC-Four was the first TRS-80 Model 4 emulator for IBM PC compatible computers. It was written by Michael Gingell and introduced by Hypersoft in mid-1987 for a price of $79.95. PC-Four required a computer with at least 384K of memory and worked on both floppy and hard drive systems.

PC-Four (sometimes referred to as PC4)1 was quite different than later TRS-80 emulators. It achieved most of its compatibility not through Model 4 hardware emulation but by emulating the Model 4 operating system. This approach (similar to the MS-DOS emulator DOSBox today) allowed PC-Four to approximate Model 4 speed when running on a Tandy 1000 SX. The PC-Four manual described it this way:

PC-Four makes your PC emulate a TRS-80 Model 4 (in true Model 4 mode only) complete with a pseudo operating system. Once it is running the screen and keyboard of your PC behave as if you were using a TRS-80. You have four disk drives which may be physically set up as subdirectories on your floppy or hard disks although your virtual TRS-80 sees them as logical drives 0 – 3. Any printer connected to your PC’s printer port (LPT1:) appears as if it is on the printer port of your TRS-80.

Because PC-Four included its own operating system, no copy of Model 4 LS-DOS (which was still being sold) was required.

Compatibility was quite good and the only programs that caused problems were the rare ones that directly accessed the Model 4 hardware (the word processor LeScript from Anitek was a notable example). The advertisements boasted compatibility with Alcor C, Alcor MULTI-BASIC, Alcor Pascal, Allwrite, BASCOM, Electric Webster, PFS:File, Profile, SuperScripsit, VisiCalc, and Model 4 BASIC. In fact, PC-Four was “recommended by Prosoft for running Allwrite on your PC.” 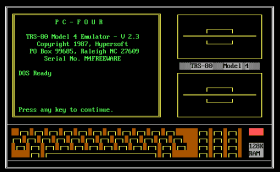 Most PC compatible computers at the time contained 5 1/4" floppy drives, but PC-Four couldn’t use TRS-80 disks directly. It required that the TRS-80 files first be moved to MS-DOS disks. To do that, Hypersoft sold PC Cross-Zap (also called PCXZ), a very nice MS-DOS transfer utility for TRS-80 disks, and Hypercross, a similar file transfer program that ran on the TRS-80. Hypersoft also sold PC Cross-Zap (normally $79.95) as a package with PC-Four for $119.95.

In March 1988, PC-Four was upgraded to version 2.0. The new version offered a number of compatibility improvements in the DOS emulation, as well as a 25% speed increase in the Z80 emulation. In 1989, Hypersoft introduced PC-Three, an emulator similar to PC-Four but for the Model III.