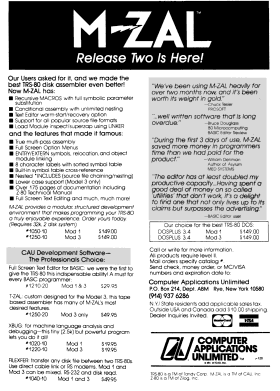 In addition to M-ZAL, Computer Applications Unlimited sold other TRS-80 development tools. These included XBUG, a $19.95 debugging tool and monitor, and T-ZAL, a $49.95 stripped down version of M-ZAL for cassette users. Unlike M-ZAL, T-ZAL was only available for the Model III.

The M-ZAL package itself consisted of three programs:

Release 2 of M-ZAL, introduced in 1982, added a fourth program named LEXCONV to “facilitate conversion between the various source file formats used by TRS-80 assemblers.” Other important features added to Release 2 included conditional assembly and macros. Release 2 was the most popular and widely used version of M-ZAL.

M-ZAL Release 3 was introduced in 1983. According to the advertisements, the new version added a labeling disassembler, the XBUG-II debugger/monitor, and new linker overlay features. The price was also lowered to $99.95.

David Willen and Jeffrey Krantz later wrote the well-regarded book 8088 Assembler Language Programming: The IBM PC. But they don’t appear to have ever written a version of M‑ZAL for the IBM PC.

I really liked M-ZAL I spent many hours working with it. Still my favorite development tool.

I used M-Zal extensively. I had built a serial port and a modem for my Model I, hoping to participate on computer bulletin boards. To my shock and dismay, Radio Shack’s modem program didn’t work with my hardware ( duhhhh ). So I wrote a modem program in Z80-ASM using M-ZAL. I used multiple files, macros, conditional assembly – pretty much everything. The stuff I learned led to a 20 year career in software engineering.