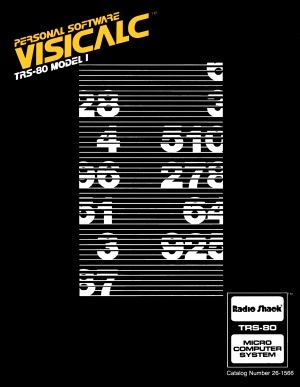 VisiCalc is one of the most important programs ever created for microcomputers. It was not only the first spreadsheet program but is also generally regarded as the first “killer app.” It was the top selling program for four years, selling more than 200,000 copies in its first two years alone. Its popularity helped to drive early personal computer sales; many people bought a personal computer just to use VisiCalc.

Dan Bricklin came up with the idea for an “electronic spreadsheet” while still a graduate student at Harvard Business School. He and Bob Frankston founded Software Arts, Inc. in 1979 to explore the idea and VisiCalc was the result.

First demonstrated at the National Computer Conference in June 1979, the Apple II version of VisiCalc was shipped on October 17, 1979. Although developed by Software Arts, VisiCalc was sold by Personal Software (later VisiCorp), a company founded in 1976 by Dan Fylstra and Peter Jennings.

VisiCalc for the Apple II was so successful that versions for other computers were inevitable. The initial targets were the Commodore PET, the Atari 800, and the TRS-80 Model I. The Commodore PET and the Atari 800 shared the same 6502 processor as the Apple II and could use the same VisiCalc code. But the TRS-80 version required converting the VisiCalc code to use the Z80 processor, a project undertaken by Seth Steinberg. Despite this, both the Atari 800 and TRS-80 versions were released in late 1980, almost a year after the release of the Apple II version. 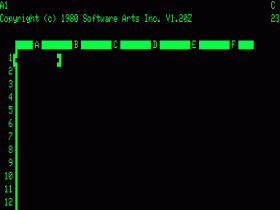 VisiCalc for the Model I

Radio Shack sold VisiCalc for a number of its computers: 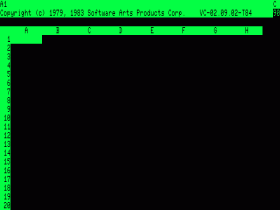 Enhanced VisiCalc for the Model 4

A professional management and planning tool, VisiCalc takes the place of a calculator, pencil, and sheet of paper in solving problems such as sales projections, income taxes, financial ratios, engineering changes, and many more. You are able to set up a particular application and as new data is entered it recalculates and displays the up-dated version throughout the program. Editing features let you change, insert or delete titles, numbers, or formulas; and formatting commands let you set up your own charts and tables.

According to the 1983 catalog, Enhanced VisiCalc included these improvements:

Enhancements include an entry editor to speed worksheet preparation by allowing you to modify formulas and labels without re-entering them. Logical and comparison operators to perform testing and branching. Optional printer allows you to print any portion of your worksheet. 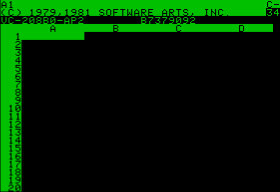 VisiCalc for the Apple II

Radio Shack devoted an entire article to the introduction of VisiCalc in the December 1980 issue of the TRS-80 Microcomputer News. That article contains a pretty good overview of how a spreadsheet is used:

VisiCalc for the TRS-80 is one of those software products that was meant to be. There is finally an alternative to the long hours many of us spend working with numbers. Those of you who use columnar pads, calculator, and pencil to generate forecasts, plans, budgets, and the like are going to get excited about VisiCalc. It’s applicable to just about any task that involves a row and column approach to analyzing numbers. VisiCalc is great for applications like budgeting, tax planning, financial ratio calculation, cost estimation, sales forecasting, manufacturing build schedules, pro-formas, engineering calculations, and even personal budgeting. Since any planning activity is a series of revisions, corrections, and time consuming recalculations we don’t usually have the time to examine all of the scenarios that can affect the results. VisiCalc’s ability to instantly provide recalculation for a “what if” question is dramatic to see. Once a VisiCalc model is set up with data and formulas, you can watch as VisiCalc immediately recalculates all values having a relationship to the item which you changed. The screen almost instantly totals across rows and down columns saving hours of work.

While introducing VisiCalc for the TRS-80, Radio Shack neglected to mention that it had already been available for Apple II for nearly a year! 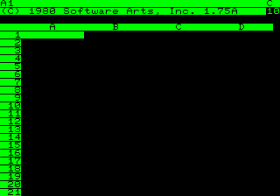 VisiCalc for the Commodore PET

The period that VisiCalc was exclusive to the Apple II was a very important factor in the popularity of the Apple II. Although the short term impact is often exaggerated, the long term impact was very significant. VisiCalc helped to legitimize the Apple II as a business computer, attracting many businesses that previously would never have considered the Apple II as an option. It’s interesting to speculate (and many people have) about how events might have turned out differently had VisiCalc been released first for the TRS-80.

Many Apple II’s were bought solely for running VisiCalc. In fact, Peter Jennings, one of the founders of Personal Software, recalled visiting Radio Shack headquarters in Fort Worth in 1980 and seeing Apple II’s on desks running VisiCalc. This was something Ed Juge, Director of Computer Merchandising at Radio Shack, alluded to in his “Inside 80” column in the December 1980 issue of 80 Microcomputing:

Whether you’re calculating the family budget, or doing corporate financial planning—if you own a TRS-80, VisiCalc would be an excellent addition. (Yes, Tandy’s financial wizards have been using it for some time, too.) 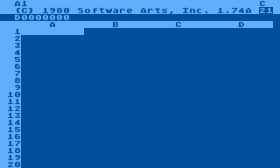 VisiCalc for the Atari 800

The Apple II, Atari 800, and IBM PC versions of VisiCalc were all copy protected. The Commodore PET version took it a step further: it came with a special ROM chip that needed to be plugged into a socket on the PET motherboard. VisiCalc wouldn’t run at all without that ROM installed.

Curiously, the TRS-80 Model I version of VisiCalc used no copy protection at all. In fact, the manual contained a section titled “Making Backup Copies of Diskettes” which included instructions for making copies of the VisiCalc disk. 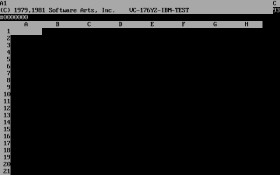 VisiCalc for the IBM PC

When IBM introduced its IBM Personal Computer in August 1981, it made sure to showcase the native version of VisiCalc. VisiCalc was one of the few programs available immediately after it was released and it soon became the top-selling program for the IBM PC. But increased competition from newer spreadsheet programs and a very public feud between Software Arts and VisiCorp eventually took its toll on VisiCalc sales.

In January 1983, Lotus introduced its 1-2-3 spreadsheet for the IBM PC, developed by Mitch Kapor. (Kapor was former head of development at VisiCorp.) Lotus 1-2-3 began outselling VisiCalc that same year and VisiCalc was never able to recapture its former success.

Lotus purchased Software Arts in 1985 and decided to discontinue VisiCalc in favor of its own product. By the time it was discontinued, VisiCalc had sold 1,000,000 copies for a variety of computers.