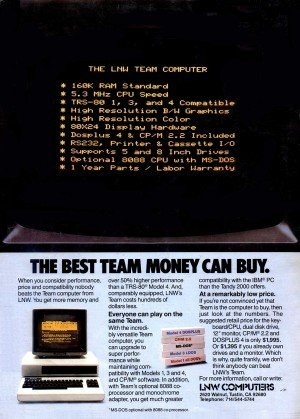 LNW Team advertisement from the July 1984 issue of 80 Micro

The LNW Team was an intriguing idea for a computer to bridge the TRS-80 and MS-DOS worlds. It was sold by LNW Computers, the company responsible for the LNW System Expansion, the LNW80, and the LNW80 Model 2.

The computer appears to have been the same externally as the LNW80 Model 2, although the standard memory was increased to 160K and the clock speed increased to 5.3 MHz. What really set the LNW Team apart was the optional 8088 board.

With the 8088 board installed, the LNW Team could run MS-DOS and MS-DOS programs. According to LNW, the LNW Team boasted better IBM PC compatibility than Radio Shack’s own Model 2000. With that expansion board, the LNW Team was compatible with the Model I, Model III, Model 4, CP/M, and MS-DOS.

The LNW Team was sold for only a short time. The final LNW Computers advertisements appeared in magazines in 1984 and it appears that the company was out of business by September 1984. Wilson Technical Services continued to repair and sell parts for LNW products for several years after that.

I miss the days of working at LNW Research! It was such an exciting time to be involved in the design of personal computers. Thanks for the memories!