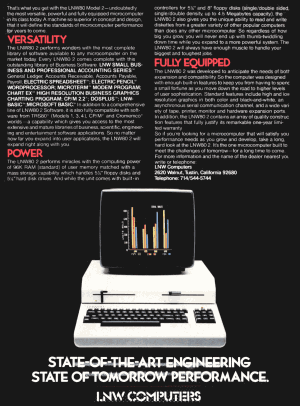 The LNW80 Model 2, sometimes referred to as the LNW80/2, was a TRS-80 compatible computer sold by LNW Computers (formerly LNW Research Corporation). Introduced in late 1982 for a price of $2695, the LNW80 Model 2 was an upgrade to the original LNW80. The LNW80 Model 2 provided nearly complete compatibility with the TRS-80 Model I but added many new features and enhancements. In addition to being available through direct sales or through dealers in the United States, the LNW80 Model 2 was also sold in Australia and New Zealand through Micro-80 magazine.

Unlike the earlier LNW80, the LNW80 Model 2 was only sold as a complete computer, not as a “semi-kit.” It was enclosed in a very sturdy (and heavy) steel case which featured an enhanced keyboard. The keyboard had several extra keys not found on a TRS-80 Model I, including CONTROL, CAPS LOCK, and two function keys (F1 and F2). There were also dual reset keys (one on each side of the keyboard) that would reset the computer when pressed simultaneously.

Each LNW80 Model 2 came with 96K of memory and with Level II BASIC (licensed from Microsoft) in ROM. A parallel port and RS-232 port also came as part of the standard configuration.

Like the original LNW80, the maximum CPU speed was 4 MHz, but now a switch on the back of the computer provided an easy way to change to 1.77 MHz for maximum compatibility with the TRS-80 Model I. Another nice feature was that no Expansion Interface or doubler was required to use floppy disks: a floppy controller was built-in and supported a mix of 5¼″ and 8″ drives in single and double density.

The LNW80 Model 2 was capable of driving a black and white, composite, or RGB monitor and could display a true 80 by 24 text screen (not a simulated one using graphics like the LNW80). Four graphics modes were supported:

One of the major new features of the LNW80 Model 2 was CP/M compatibility. Each computer shipped with copies of DOSPLUS and CP/M 2.2, allowing it to run both TRSDOS-compatible and CP/M programs. This gave a LNW80 Model 2 owner many options for software. Advertisements described the LNW80 Model 2 as compatible with software for the TRS-80 Model I, Model III, Model 4, CP/M, and Cromemco.

According to the LNW advertisements, the LNW80 Model 2 shipped with a variety of bundled software. Identified as the LNW Small Business and Professional Accounting Series, this software included Electric Spreadsheet, Electric Pencil, Microterm (a terminal program), and Chart EX (a business graphics program). Also supplied was LNWBasic, a special version of BASIC which supported the extra LNW80 features.

The LNW80 Model 2 was sold until early 1984 when it was replaced by the final LNW computer, the LNW Team.

I’m wondering… was LNW CP/M compatible with any other popular CP/M disk format (Kaypo, etc.?). If not, did any software houses release popular CP/M programs like Wordstar in LNW format?

That’s a good question. In the review of the LNW80 Model 2 in Computer User magazine, they mentioned that Lifeboat Associates, the largest supplier of CP/M software, supported the LNW format. They also mentioned using WordStar on the LNW80, so there must have been a version available.

Purchased an LNW-80 model II back in the early 80’s, and really miss that PC. Was very disappointed when the company went out of business. Does anyone have any idea how many of each LNW-80 were sold before the company folded?