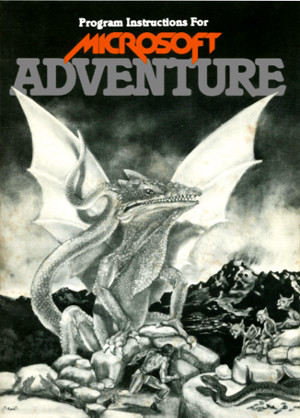 Cover of the TRS-80 manual for Microsoft Adventure

Here is a description of Microsoft Adventure from a Microsoft advertisement in the January 1980 issue of BYTE:

Only Microsoft offers Adventure complete, as originally written for the DEC PDP-10, now implemented on personal computers. The ultimate fantasy/logic game, Adventure allows you to explore the depths of the “Colossal Cave,” collecting treasures and magic, solving puzzles, avoiding hazards and adversaries — including the killer dwarves. Don’t be fooled by imitation of incomplete versions. Only Microsoft has it all. Adventure fills an entire disk with everything you need for your exploration.

The manual for Microsoft Adventure states:

Adventure was originally written in FORTRAN for the DEC PDP-10 computer and serves as a demonstration in artificial intelligence.

But in an odd omission, the manual never mentions Will Crowther and Don Woods, who were the authors of the original Adventure.

Will Crowther wrote the first version of Adventure in 1975 or 1976 while he was working at BBN Technologies in Cambridge, Massachusetts. It ran on a DEC PDP-10 running the TOPS-10 operating system.

Crowther was an experienced cave explorer (also known as caving or spelunking). He set Adventure in (with some creative license) the Colossal Cave that is part of the Mammoth Cave system in Kentucky1. Crowther’s Adventure began with the player outside the entrance to a mysterious cave. The goal is to use simple text commands to explore the cave, solve puzzles, and collect treasure. It began with this introduction:

SOMEWHERE NEARBY IS COLOSSAL CAVE, WHERE OTHERS HAVE FOUND

FORTUNES IN TREASURE AND GOLD, THOUGH IT IS RUMORED

THAT SOME WHO ENTER ARE NEVER SEEN AGAIN. MAGIC IS SAID

TO WORK IN THE CAVE. I WILL BE YOUR EYES AND HANDS. DIRECT

Adventure was undoubtedly influenced by the natural language work done by Dr. Joseph Weizenbaum with Eliza in 1966. Crowther may also have been influenced by Gregory Yob’s Hunt the Wumpus from 1972, the closest thing Adventure had to a predecessor.

Crowther stopped developing Adventure sometime in 1976. In 1977, Don Woods, having played a copy of Adventure at Stanford University, wanted to further develop the game. Woods needed to contact the author but the only clue to his identity was the “COMPLAINTS TO CROWTHER” message. In a clever move, Woods sent email to “crowther” at every domain on ARPANET. He found Will Crowther and received his permission to expand Adventure, as well as a copy of his original FORTRAN source code.

Woods doubled the size of the Adventure data file with longer descriptions and more rooms. He added more treasures, improved scorekeeping, and created the concept of a player inventory. He also put in this message:

THIS PROGRAM WAS ORIGINALLY DEVELOPED BY WILLIE CROWTHER. MOST OF THE FEATURES OF THE CURRENT PROGRAM WERE ADDED BY DON WOODS.

The Crowther/Woods version of Adventure became very popular around the United States2. BYTE magazine in 1980 described it as “the original Adventure that has been appearing around university campuses and mainframe computers for years.” It was the inspiration for the entire computer adventure game genre.

The Crowther/Woods Adventure was very popular right around the time that microcomputers such as the TRS-80 Model I and Apple II were introduced. It was inevitable that programmers would write Adventure adaptations for these new computers.

But a PDP-10 was much more powerful and had more storage than a TRS-80 or Apple. This meant that most adaptations, such as Adventureland by Scott Adams and Pyramid 2000 by Robert Arnstein (which changed the cave to an Egyptian setting) didn’t try to implement the complete Adventure but used a smaller portion of the game.

Microsoft Adventure, written by Gordon Letwin through his company Softwin Associates3, was the first commercial adaptation to implement the complete Adventure4. The data file for Microsoft Adventure was much too large to fit in available memory, so the game required a floppy drive on both the TRS-80 and Apple II.5 (This also meant that the drive was frequently accessed, although not after every move as some have said.)

Since the Crowther/Woods Adventure was considered public domain, Letwin was able to use the descriptions in the data file with only very minor changes. He reimplemented Adventure in assembly language and managed to fit it in 32K, which was quite an accomplishment. Only a few features specific to the PDP-10, such as administrator access and usage hours, were left out of the TRS-80 and Apple versions.6

Microsoft Adventure didn’t use a TRS-80 operating system, but came on a self-booting, copy-protected disk. It may have been the very first TRS-80 copy-protected program.

The Crowther/Woods Adventure saved games in a PDP-10 specific manner, so Microsoft Adventure added a SAVE command to allow adventurers to save up to two sessions to disk. Unfortunately, these two sessions had to be saved to the original program disk. This could be somewhat nerve-racking because there was only one copy of that disk and it couldn’t be backed up. Microsoft would replace a damaged floppy for a “nominal $7.50 charge.”

The manual offered hint sheets (costing $1.00 each) for adventurers frustrated by the game:

If after repeated efforts, you still cannot solve the problem, you can send for one of four pamphlets available from Softwin Associates, implementers of the game, that will help you through specific parts of the cave.

Microsoft Adventure for the IBM PC

When the IBM PC was introduced in 1981, one of the programs IBM specifically wanted from Microsoft was an IBM PC version of Microsoft Adventure7. Here is the description from IBM’s product fact sheet for the IBM PC that was distributed to the press on August 12, 1981:

Microsoft Adventure provides the IBM Personal Computer with a role-playing fantasy game. The game setting is a vast network of caves beneath the earth and the land outside. The fantasy world contains 130 rooms or nodes, 15 treasures, 40 useful objects and 12 problems to solve. The program allows players to store the status of two games on a diskette. It will provide useful hints, instructions and feedback on a player’s progress.

Thanks for the excellent review. Brings back wonderful memories. My older brother (by 12 years) worked with mainframes and he’d take me to his work at night to play Adventure. Later he gave me an old TRS-80 with memory expansion unit and floppy, and the Adventure game to play at home. I no longer have the TRS, but I have the original Adventure manual and floppy disk on my shelf at home. My kids still don’t believe me that it was Microsoft’s first computer game. I’ll have them read this webpage. :)