From a Med Systems Software catalog

Labyrinth was the second game in the “Continuum Series,” a set of 3-D adventures sold by Med Systems Software. It was preceded in the series by Deathmaze 5000 and followed by Asylum and Asylum II. Like most of their games, Med Systems also sold tape and disk versions of Labyrinth for the Apple II.

Labyrinth was in many ways a continuation of Deathmaze 5000. Once again, the player is trapped in a gigantic maze which contains numerous dangers. This time, the primary goal is to defeat the Minotaur, a half-bull, half-man creature from Greek mythology. 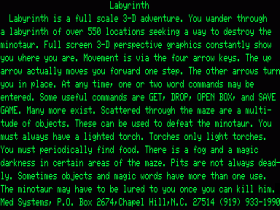 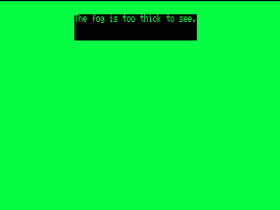 Heavy fog can be an obstacle

But along the way, the player encounters heavy fog, a bear, a gnome, a wraith, and even another adventurer (watch out for the cream pie!)

From a Med System Software advertisement:

Labyrinth deposits you in a huge maze of tunnels inhabited by gnomes, ghosts, witches, and an evil Minotaur. You must find the weapons and treasure you need to lure and destroy the Minotaur before he extinguishes you! The labyrinth meanders through space and time, so don’t be surprised if you come upon yourself wandering though the lonely corridors. 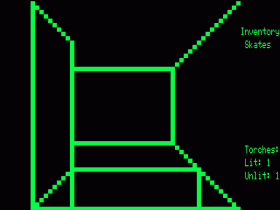 Pits are a form of rapid transit 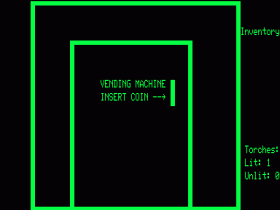 Falling in a pit is not fatal in Labyrinth (with one notable exception). Instead, the pits scattered throughout the maze provide a way to travel from one level to another. It’s important to remember that even though you “fall” into a pit, you don’t necessarily end up in a lower level.

Another means of transport include teleportation squares (Frank Corr described them as a “cute little stunt”), which whisk the player to another part of the maze with no indication that anything has happened. These squares make mapping the maze rather difficult. 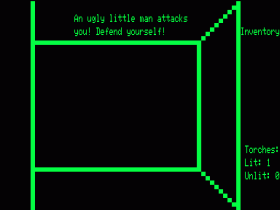 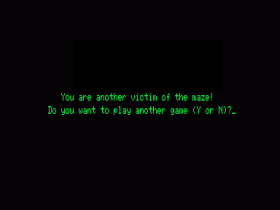 The game is over

All the while, it is vitally important to find enough food to stave off starvation and torches to illuminate the maze. After all, the Minotaur attacks in the dark!

In my opinion, Labyrinth is an excellent follow-up to Deathmaze 5000. It is a more challenging adventure, with more logical puzzles, and one of the best examples of a TRS-80 adventure game.