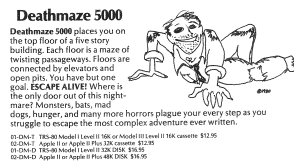 From a MED Systems Software catalog

Deathmaze 5000 is set in a five floor building with over 500 locations. Like many adventure games, the ability to create detailed maps is a crucial skill for completing the game. Somewhat surprisingly, basic knowledge of the epic poem Beowulf is also quite helpful.

Solving the game is very difficult: according to Med Systems Software only two people outside of their staff had successfully completed it by December 20, 1980. 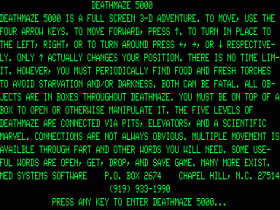 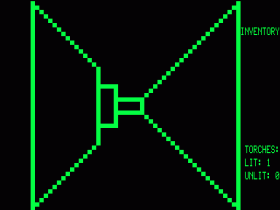 A hallway with doors

As stated in the manual:

Deathmaze 5000 is a full scale three-dimensional adventure. You move through a gigantic five story building depicted graphically on your monitor in 3-D perspective. Scattered through this building are a multitude of objects and incredible obstacles. Your only goal is to leave Deathmaze. Alive.

Your goal is to escape, but along the way you must collect items concealed in boxes that are scattered throughout the building. Potential dangers include being bitten by a snake, mauled by a vicious dog, sliced by a guillotine, or attacked by a monster. Not only that, but you also need to find enough food to stay alive and sufficient torches to prevent you from being left in darkness. 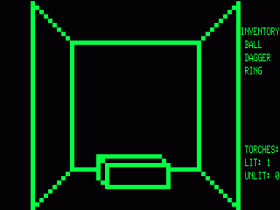 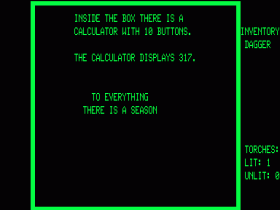 Deathmaze 5000 is full of puzzles, and one of the most frustrating involves the calculator. Picking up the calculator is essential to solving the game, yet once you take it you become fixed in position, unable to move. Here are the only clues given by the game:

The only way to free yourself is to press a particular sequence of arrow keys.

Any adventurer who became hopelessly stuck could purchase hint sheets from Med Systems Software. Each hint sheet cost $1.00 and contained over a dozen encoded hints (15 in the case of Deathmaze 5000). 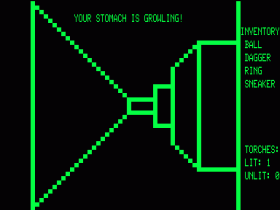 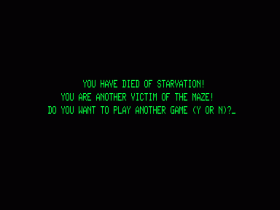 The game is over

Deathmaze 5000 uses a first-person perspective throughout the entire game, giving it an experience unlike most other adventure games at the time. (Don’t forget that it was released 13 years before DOOM.) One of the few other contemporary first-person adventure games was Akalabeth: World of Doom by Richard Garriott (better known as Lord British). Akalabeth was released for the Apple II the same year as Deathmaze 5000, but like his later Ultima I, Akalabeth used first-person perspective during the dungeon sequences only and a top-down view elsewhere.

Deathmaze 5000 was one of the first TRS-80 games I ever played, and remains one of my favorites. In case you are wondering, I needed only one hint to solve the game (the previously mentioned calculator).

For more information, including hints, maps, and run-through, check out the Deathmaze 5000 section on Magic Chris' Asylum Page.

Awesome! I looooved that game on the Apple. Had dreams about it as a kid – never solved it (life intervened). Memory of it recurred in a poem recently, and so I popped around to have a look. Thanks for the well-written and awesome memory (I had a color TV, so I remember the graphics in B&W). What a game. If there was a packet of all the really good games one used to have…Autoduel and Kareteka and very especially Hadron come to mind straight off the bat. Oh, and The Heist. Never solved that either – it was an awesome mystery puzzle for me and my best friend as little kids. In my view, the text+graphic adventure format is unexcelled (except by Ultima 9, the greatest unfinished game in the Universe). Ah. Gruds in Space, on the list. Oh, I want a mega-disk full of those. Never have time to play ‘em – now that I’m writing again, I never have time for anything and my coffee is ALWAYS coldish – small price but strange. When I am old and rich (if ever – well on the way to old, and pockets are like the hard vacuum between galaxies still) – I want all the old games. Heck with the new ones – I’ll never catch up that way. Prince of Persia, that was fun. But Hadron is the final grail of ancient gaming, in my view. Thanks again – talk to ya –

My first computer was a TRS-80 Model II Level 1 (4K ram) for $400. Two days into it, I used all the ram and was able to trade up to the Level II (16K ram) for $300 more. The limit of my budget for a long time. Death Maze 5000 was also my first game. I got stuck in the room and never figured my way out. Now I know the answer, I still don’t see any connection to the clues in the game. Did they just make up the clues or is there some logic I am missing.

I probably would have dissassembled it to find the answer had I not been more interested in programming my own stuff. It did inspire me to make a maze generator with a 3d view as in the game a week later. Because this was the second program I ever wrote, I often used the same idea to become familiar with another language.

Thanks for the article, I now know the answer to this riddle which has come up in my thoughts once every so many years. Also gave the game a quick try to bring back memories. Hopefully I will one day know the logic behind the answer so I don’t have to have this new riddle pop in my head in a few years…lol. Was thinking how much easier it would be to make the 3d maze again than the 3d work I’m currently having to do. Had a mental block (getting too old for this 3d geometry), so thought I would look it up again. Happy to have found the answer and play the game again.

I was just thinking about this game today and found your site through a google search. Can’t believe the stuff you can find on the internet. I had this game for my $650 (used) model I, level II TRS 80 with a tape drive. I freakin hated this game. I thought the puzzles were hard and I felt claustrophobic in the maze. The season, turn, turn, turn thing did me in. I think my late brother figured the puzzle out though on his own. For me, I enjoyed the games like the SC78503 starfighter game. Amazing the stuff that gets stuck in your head and stays there.

What was that graphical game where you were some kind of commando and landed on a planet. You could choose different load outs for your mission. Heavy and light blasters. Anyway, the graphics were awful.

The games back in the 80’s were just incredible. What made them incredible was that you had to use your imagination to get the amazing graphics and the programmers used what little was left to make the gameplay decent on an incredibly cramped memory space.

Anyway, cool site. Thanks for making it and the reference to deathmaze 5000. I think I’m gonna watch “the cube” again tonight. :)

Deathmaze 5000 was the first of the Med Systems games that I solved. I also solved Labyrinth, and both Asylum games. Absolutely loved them! I should go back and solve them again some day…

I know I still have my hand-drawn maps for all of them somewhere. I’m moving house soon and over the next few months I’ll be sorting through all my accumulated ‘stuff’ and packing it up, so no doubt I’ll come across my collection of TRS-80 game maps and notes. Not sure whether I should hang onto the actual pieces of paper, or scan them and re-cycle?!? Hmm…..

I loved this game. I actually resorted to disassembling the machine code to assist in figuring it out, which eventually paid off. It is amazing looking back when you realize this game ran on 16K. By comparison, a BLANK word document for Office 2003 is close to 10K.

At one time, I was trying to find the author to get permission to put a flash simulation up on the Internet. (I guess I’d have to do the flash simulation part. I already have done Z-80 emulation).

Ya, I had issues with the calculator, too. Also seriously considered going into the code to figure it out, but never did. I think about this game all the time… especially when ever I hear the song Turn, Turn, Turn by The Byrds. I tried lyrics from that song & even stuff from the Bible, but never got it. I played it again about 15 years ago, on my old Apple II. I’ll never get it out of my head until i figure it all out!!

To get the calculator and get out of the room, “invert and telephone”… 317 upside down is LIE. On a telephone keypad that is 543.

At the very end of the game it said, “What was the name of the monster?” You had to type in the name of the monster to escape. Well I had absolutely no clue. The calculator room was bad enough, but I went through this maze another 30-40 times looking for what I could have possibly missed. I even mapped out every floor on graph paper, leaving nothing to chance. Well weeks into this in my high school literature class we opened the book and had to read some story about some guy called Beowulf.

I about flipped out right there in class! Grendel… GRENDEL! I was shouting it out in my head. I could not believe it. I told the guy next to me that was the name of the monster; he just looked at me strangely. No way he would possibly understand the torment I’d been going through. I could go through all those arrow key moves in my sleep – get through the entire game in about 3-4 minutes flying through the hallways to get to the end, just to get that stupid question before I could escape. And here I was, several hours away from my computer with the answer in hand. I had never before been so capable of just leaving school to go home, but I stuck it out to the end of the day with nothing on my mind but that game and my answer.

I sprinted home – literally sprinted. I was in cross country and I did the 3/4’s mile faster than I ever had before. Turned on my TRS-80, got the game loaded from the tape, zipped to the end and typed in the answer and I was free!!

Here it is 1:00am on a Sunday and I stumble across this game on some message board on the internet. Seeing the screen shot just brought all that back to me instantly. Had to vent it out. :)

The TRS-80 version had a bug that stymied me and my friends both. On level 4, after climbing the snake and picking up what was there (forget now), you turned back towards the pit you climbed out of, and used either FART or CHARge (forget which) to attempt to scoot across the pit. The usual “Oh no a pit!!!” sequence, then you were in a very strange level 5. It made no sense to us, we thought we were in the real level 5, but we weren’t. We figured THAT out when we discovered that the Apple ][ version didn’t do that. Never did find the right way to level 5 – glad for the walk through now…