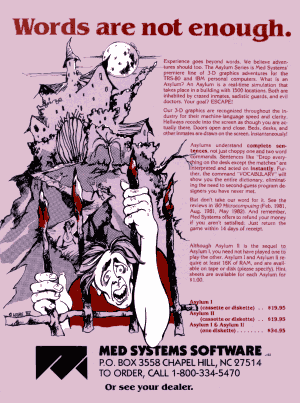 Asylum was the third game in the “Continuum series” of 3-D graphics adventures sold by Med Systems Software. It was preceded by Deathmaze 5000 and Labyrinth and followed by Asylum II. In early 1983, Med Systems Software changed its name to ScreenPlay (which was itself a division of Intelligent Statements, Inc) but continued to sell Asylum.

Med Systems Software sold Asylum for the TRS-80 in both cassette and disk versions. The cassette version came in both 16K and 32K version. The 16K version contains the same puzzles, but the descriptive messages are shorter and the parser recognizes fewer words. 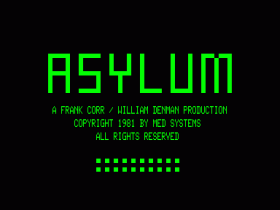 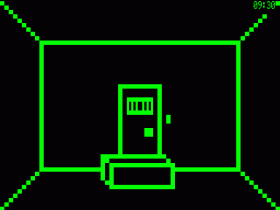 Asylum, which supposedly stands for Adventure Syndrome Leading to Ultimate Madness, is a full-screen graphical adventure. According to an advertisement, Asylum places the player in “an institution full of guards, inmates, doctors, and many more bizarre characters.”

The goal to Asylum is to escape from the facility. The player starts out alone in a cell with a locked door. The trick is to leave the room and find a way out, all the while trying to avoid the guards who want to recapture you.

Asylum operates more or less in real time (40 seconds equal one minute of Asylum time). The game begins at 9:30 PM and the player has to escape by 5:30 AM. The time constraints are a bit deceptive because of an event that occurs late in the game which takes up hours of time. 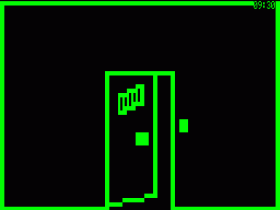 After the door is opened 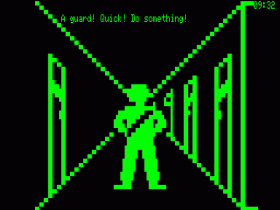 Confronted by a guard

Here is another description from a 1981 Med Systems Software catalog:

Asylum places you on a cot in a small room. Periodically, a janitor lobs a hand-grenade through the window of your locked door. What you do next could mean survival and escape! It could also mean permanent residence in the home for Deathmaze survivors! To leave, you will have to deal with guards, fellow survivors, doctors, the infamous Crazed Carpenter, and much, much more. Don’t expect to get out any time soon!

Med Systems Software invited anyone who completed Asylum before November 15, 1981 to send in their solution. All valid entries were entered in a drawing, with the winner to receive an Atari 400 computer. 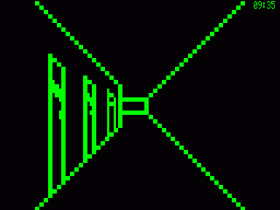 A look down the hallway 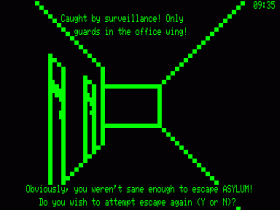 Caught by the guards

The Asylum game engine improves upon Deathmaze 5000 and Labyrinth, even though it takes up the same amount of memory. As Frank Corr said in a 1981 article, “Everything is twice as good as Deathmaze.” The layout in Asylum consists of over 1500 locations and the vocabulary parser is also more sophisticated, allowing longer sentences such as “GET EVERYTHING ON THE TABLE” or “OPEN DOOR WITH SILVER KEY.”

Part of the fun of Asylum is in exploring all of the strange details. For example, every time you look up, a piano will fall on you, ending the game. But that seemingly unimportant detail becomes very useful later on in the game. Lying down on the bed in your cell does nothing (the game says “Forget it for now”), but it becomes very important later on.

Asylum was one of most creative TRS-80 games and remains one of my favorites.

I played that game nonstop for weeks. It was unlike anything else I played, what a blast. I remember the axe murderer, who was the recipient of the piano on the head. It took a while to figure out to pass him the note. Great memories.

I loved the Med Systems games, and managed to complete Deathmaze 500, Labyrinth and both Asylum I & II. I believe I still have the maps I drew on graph paper in a box or drawer somewhere, along with maps from some of the Scott Adams and Infocom text adventures, of which I completed only a handful of each.

i love this game. can you buy it and use it on a modern computer

Our TRS-80 crashed before we could finish this one – I completely agree an absolute classic. It ran so smooth and quick as well as being 3-D. Thank goodness for the internet which revealed to me where those BLASTED matches were. Serves me right for not checking every door properly!

Remember Med Systems so well, was asked to send in photos of myself and co-worker to be added into the new game (at the time of creation) wariors of ras.

Getting to know William and Frank was a real buz.

Asylum, for me was the ultimate in early games, exciting and the unknown was all too much, many times i have completed the maze only to be asked at the end “what was the name of the monster” of course there is no monster and boy did I tell William and Frank.

Loved playing this game. It inspired my mother’s nick name; the “mad janitor”. She tidies things up (just like the mad janitor, whenever something is left in view). Whilst my mother uninitentinonally forgets where she put the thing (it is more important to have the place tidy than know where everything is, apparently) but I think the janitor was just nicking stuff, to make it hard for the player, of course… :)

Played this game for hours at a time also, only to hit a mirror and be teleported to some other part of the maze. Getting in and out of rooms was a challenge but I cannot ever remember getting out of that place…ever, but it was great in its day.

The most amazing game ever produced for the Model I. I had a friend who solved it, but it took him weeks, and he wound up with huge sheets of paper that he used to map everything out, a task made much more difficult by the revolving doors and transports in the game.

Everyone remember getting run over by the dragster? Wild.

I was having dinner with Mike and his wife, who I worked with at Research Triangle Institute. Somehow the topic got on my favorite TRS-80 Model III game of all time, Asylum. Imagine my surprise to find out I was having dinner with its author! Wonderful! Just an all-around great game, with clever presentation and humor. Don’t look up!

I played this so much that my model 3 had 2 keys wear out and stop working. I loved it.

Man, I loved Asylum! Owned it on the Genie-1 (an EACA clone sold in the UK) & played it to death (by piano!)

Thanks for the memories!