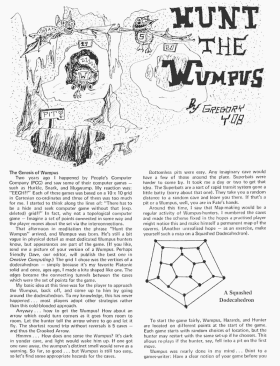 Hunt the Wumpus, also known as Wumpus 1 or simply Wumpus, was an important early computer game. It was written by Gregory Yob1 in either 1972 or 1973[&1970]. Hunt the Wumpus was one of the first games to allow the player to move around a series of interconnected rooms. Although not an adventure game itself, it influenced the text adventure games that followed.

The exact origins of Hunt the Wumpus are hard to pin down. Most sources say Gregory Yob created it while a student at the University of Massachusetts at Dartmouth in 1972.2

But Gregory Yob wrote in Creative Computing that he first envisioned Hunt the Wumpus in California, not Massachusetts. According to Yob, it all began when he visited the People’s Computer Center at Menlo Park, California (probably in 1973). The People’s Computer Center (also known as PCC)3 was the brainchild of Bob Albrecht. Created in the late 1960’s, it was one of the first places in the world where ordinary people could stop by and use computers. Not surprisingly, people liked to play games at the Center, and three popular games in 1973 were Hurkle, Snark, and Mugwump. All three games involved locating something in a 10 by 10 grid, a concept which Yob disliked. He wondered:

In fact, why not a topological computer game – Imagine a set of points connected in some way and the player moves about the set via the interconnections.

Rather than use a simple grid, he decided to base Hunt the Wumpus on a dodecahedron. His game featured a cave with twenty rooms with connections between the rooms. Each room had three tunnels to other rooms. The goal was to use a “crooked arrow” to shoot the Wumpus, a creature which was in one of the rooms. The Wumpus remained in the same room unless you moved into his room or fired an arrow. If you did, there was a 75% chance that he would move to another room. If that happened to be your room, the game was over. To complicate matters, two rooms had deadly bottomless pits and two rooms had Superbats which would move you to a random room. (Yob described Superbats as a “sort of rapid transit system gone a little batty.") The Wumpus was unaffected by both pits and Superbats.

After finishing Hunt the Wumpus, Yob gave it to the People’s Computer Center. The next he heard of the game was one month later at a conference in Stanford:

PCC had a few terminals running in a conference room and I dropped by. To my vast surprise, all of the terminals were running Wumpus and scraps of paper on the floor with scrawled numbers and lines testified that much dedicated Wumpus-hunting was in progress. I had spawned a hit computer game!!!

Hunt the Wumpus was published in the November 1973 and the January 1975 issues of the People’s Computer Company newsletter. It also appeared in the September/October 1975 issue of Creative Computing. Hunt the Wumpus was a staple of BASIC game collections, appearing “officially” in books by the People’s Computer Company and Creative Computing and in modified versions in several other books.

Yob later wrote Wumpus 2, which added five more caves, plus a “do your own” cave that you could design yourself. Wumpus 2 was published in the January/February 1976 issue of Creative Computing.

Wumpus 3, although not written by Yob, added “earthquakes, bat migrations and the incredible ‘turnareo’” to the game. As far as I know, it was never published and is no longer available.

Gregory Yob offered paper tape copies of all three Wumpus games for $5.00 each.

Hunt the Wumpus was later ported to many different systems and many different computer languages. Just about every popular microcomputer system had a version (or multiple versions) of the game. It became so widespread that many people forgot its origins. Even today, several sources credit Ken Thompson, the legendary computer scientist and co-author of UNIX, as the original author of Hunt the Wumpus4

But Yob viewed this ubiquity as a good thing:

In any case, Wumpus has spawned several versions and spread about the computer games-dom really nicely. For myself, the soul of the game is in the idea and fun of it, rather than the program or the computer which hosts it.

All three were called PCC interchangeably, making some accounts a bit confusing.

I too have been hunting for Wumpus 3 without success…Can you confirm that Wumpus 3 was never published by PCC in any of their journals or books?

I talked to David Ahl (editor of Creative Computing) via email several years ago about it. He was sent Wumpus 3, as indicated in the Wumpus 2 article (“We didn’t have room for Wumpus 3”), and still has it, but isn’t allowed to release it for legal reasons. :-(